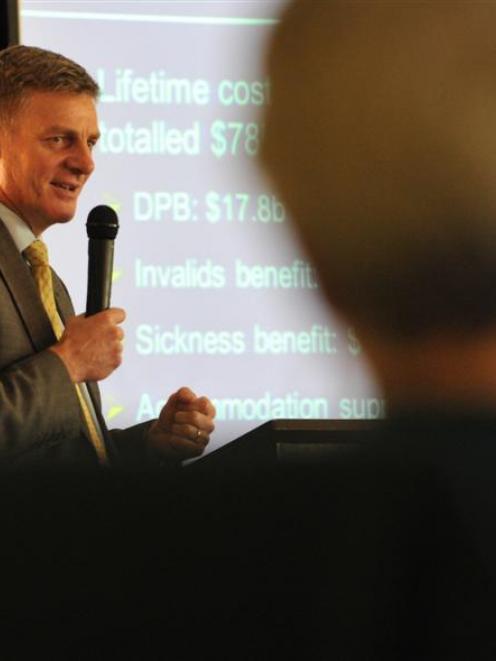 Finance Minister Bill English outlines the Government's budget for the next financial year, during an address to the Otago Chamber of Commerce in Dunedin yesterday. Photo by Craig Baxter.
The rebuilding of Christchurch is ''bigger than Ben-Hur'' and will line the pockets of Dunedin contractors for up to eight years, Finance Minister Bill English says.

He was in Dunedin yesterday speaking to about 70 members of the Otago Chamber of Commerce.

Mr English presented a summary of the Government's recently-announced budget for the 2013-14 financial year.

''It will continue to affect this economy more and more for the next six to eight years before it starts to wind down.''

The Government's share of the rebuilding was $15 billion, including $2 billion in the coming financial year.

''The problem in Christchurch is not money.

''The real challenges are getting through the insurance claims, getting technical problems sorted out and restoring commercial values in the city,'' Mr English said.

About 1200 central city buildings had been demolished and 1000 new homes started.

''It's going to have an impact right across New Zealand, as construction in Christchurch picks up and the love is spread throughout the country.

''For companies here in Dunedin, it's going to make a big difference.''

Mr English was optimistic about the country's economy and proud of New Zealanders' resilience during the recession.

Although household debt was considered ''very high'' by international standards, the Government's debt was relatively low.

The country's net debt was expected to peak at $70.3 billion in the 2016-17 financial year, which was costing the Government $130 million a week at present.

''That's the price we pay for wanting to protect our most vulnerable while investing in the future growth capacity of our economy,'' Mr English said.

He said there would be another recession, it was just a matter of time, so the Government was focused on reducing net debt in the long term.

Labour Party MP David Clark challenged Mr English about New Zealand's debt, but the minister was also congratulated by a chamber of commerce member for doing a ''thankless job'' well.