By John Gibb
0 Comments
It may go against the grain to admit it, but Hayward’s Auction House co-owner John More is still scratching his head about the exact function of a mysterious item sold by auction last weekend. 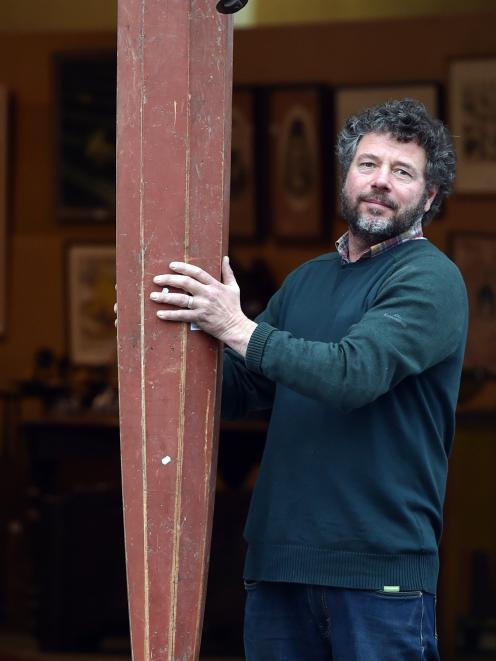 John More displays the unusual object that was sold on Friday.PHOTO: PETER MCINTOSH

The mainly wooden, 2m-high item, listed as a "hanging wooden spire", was bought by an experienced Dunedin auction-goer for $200 at the Sunday auction in the city, and neither seller nor buyer knew exactly what it was.

Mr More said he had heard suggestions the spire-like object was intended to hang in the middle of a grain storage area to create a grain vortex which could be useful for moving the grain, including to empty the storage facility.

"It could be one of those things that plagues me for the rest of my life," he said about the continuing puzzle.

The enigmatic object was apparently initially found in a grain storage area at Abbotsford Farm, Taieri, about 10 years ago, and was recently obtained from a Waikouaiti resident.

Recent suggestions about the mystery object have all been linked to grain storage and transfer.

One Otago Daily Times online correspondent said "my dad reckons this might be to drive into grain stacks to avoid overheating of the stack of grain". Several people similarly believe the mystery object may have been used to aerate grain.

Noel Sheat (83), who has been grain farming in Palmerston for more than 60 years, said he was unsure what the object was, but it might have been intended to aerate grain, and he recalled seeing a much smaller, screw-shaped device used for this purpose at least two decades ago.

Mr More remains keen to hear from anyone who could solve the mystery.

"We’d love to hear from someone who knows what it is," he said.