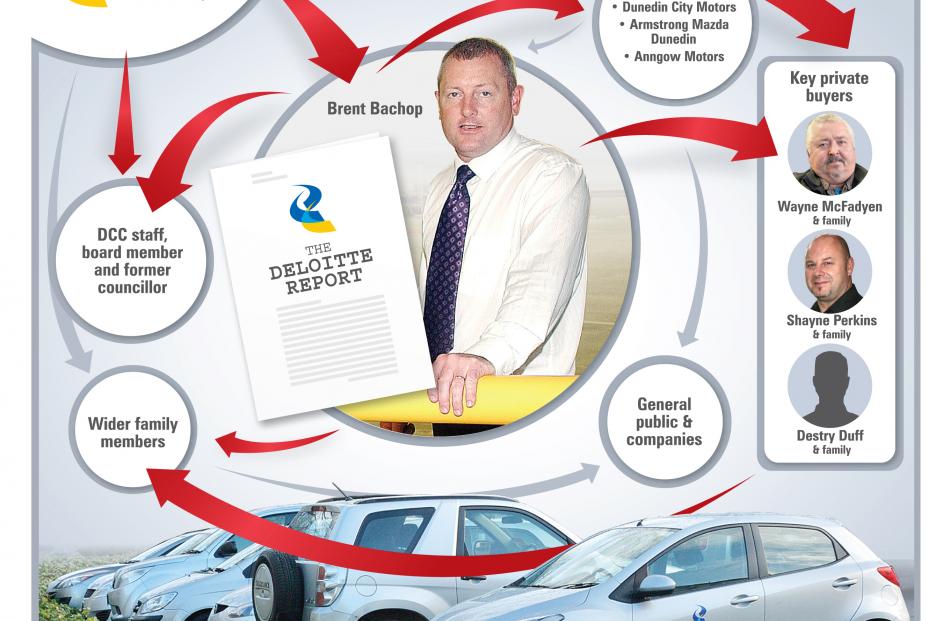 The network of buyers cashing in on the Dunedin City Council's $1.5million Citifleet fraud has been revealed.

But even after reading Deloitte's full ''Project Lewis'' investigation report - the Otago Daily Times was leaked a copy - there are still many unanswered questions.

The report, which has not been made public until now, named the key parties involved in buying and on-selling many of the 152 cars that disappeared from the council's books over more than a decade.

The report identified former Citifleet team leader Brent Bachop as being at the centre of the fraud.

It also named members of three Dunedin families who, together, bought dozens of council-owned cars from him.

Those names included Wayne McFadyen, Destry Duff and Shayne Perkins and members of their extended families, who between them bought 42 vehicles, Deloitte found.

All three men told Deloitte's investigators they believed Mr Bachop was entitled to sell the council cars, and police confirmed last week there was insufficient evidence to lay charges against anyone.

Mr Perkins was a former council employee and Mr Bachop's brother-in-law, while Mr McFadyen was a motor mechanic who used to work at Anngow Motors, which serviced council vehicles.

Wayne McFadyen told the ODT when contacted he had done nothing wrong and had ''nothing to hide'', although he disputed some of the report's figures.

He was reluctant to comment in detail, having not seen a copy of the full report, but believed the council had to shoulder the blame.

Messrs Perkins and Duff declined to comment at all when contacted, while Keith McFadyen said he was a victim in the fraud, too.

The report confirmed Dunedin City Motors, Armstrong Mazda Dunedin and Anngow Motors were the three dealerships which between them bought 14 vehicles from Mr Bachop.

All three companies have previously been identified by the ODT as helping Deloitte with its investigation.

The leaked report for the first time tied them to specific transactions by name.

The report showed Mr Bachop sold Citifleet vehicles to the dealerships while they were either still registered to the council or just days after the ownership of the vehicles was transferred into his own name.

It also showed Dunedin City Motors accepted one vehicle, still registered to the council as a trade-in towards a Ford Territory for Mr Bachop's own private use.

''We are satisfied that none of our staff members had any awareness of the fraud perpetrated on the DCC by Mr Bachop.''

The company, through its lawyers, told Deloitte's investigators its staff could not recall the specifics of the transactions, and denied any knowledge of unlawful activity.

Anngow Motors no longer exists, having been sold to Armstrong Mazda in 2007, which was in turn sold to Dunedin City Motors in 2009.

A spokesman for Anngow Motors told the ODT the company was ''satisfied that all transactions were both professional and above board''.

Armstrong Prestige Dunedin general manager Muir Gold did not want to comment on the report's findings.

He would say only that there were no links between the old company and his one, despite previously being part of the same Armstrong Motor Group.

Mr Bachop and members of his extended family purchased another 19 vehicles, and others went to individual members of the public and companies as one-off sales.

The full tangled web of buying and selling was detailed in graphical form at the back of the Deloitte report, presented as a series of family trees with branches spreading across the page.

While the Deloitte report was clear on the buyers and sellers, it left open the extent to which Mr Bachop's widow, Maria Smith, had benefited from the fraud.

Ms Smith has repeatedly declined to comment to the Otago Daily Times, including when contacted by the newspaper this week.

The Deloitte report notes she has sworn an affidavit stating she had no knowledge of her husband's criminal activities.

Deloitte found she had purchased a council-owned tandem trailer, and had regular use of Citifleet vehicles for personal use for periods of time.

Ms Smith also used a council-owned Ford Focus for six months from November 2013, after it was retired from the council fleet but before it was sold, legitimately, at Turners Auctions, the report said.

Investigators had also found Mr Bachop had equipped his own Citifleet vehicle for ''everyday'' personal use, including installing child car seats, and racked up at least $102,908 in spending on personal items on council fuel cards.

Proceeds from car sales worth at least $349,000 had been channelled into Mr Bachop's Westpac account, Deloitte's analysis had found.

The money was believed to be only one part of the wider fraud, but access to other accounts was still being sought, the report said.

Bank statements for the Westpac account, given to Deloitte, showed it had been spent mainly on living expenses.

The amount of spending was ''unusually high given that it is not a joint account'', and covered costs ranging from groceries, school fees and insurance to spending ''consistent with a family holiday'', the report said.

There also appeared to be at least four eftpos cards attached to the account, and evidence of transactions drawing on the account occurring in both New Zealand and Australia on the same day, the report said.

''It does not appear that they were internet transactions, but two people with access to this account in different locations,'' it said.

On another occasion, $32,000 in proceeds from the sale of a Mazda BT50 to Dunedin City Motors had been due to be paid into an ASB account, under the name of Mr Bachop and Ms Smith, in 2012.

''For some reason this payment was not processed and a cheque was written.''

Deloitte had been unable to determine to what extent, if at all, Ms Smith had benefited.

It was also not possible to ascertain what Mr Bachop did with cash payments he received for council cars, ''but potentially Ms Smith may be able to assist with this''.

Ms Smith, contacted at home this week, hung up after telling the ODT: ''Please don't ring this number again.''