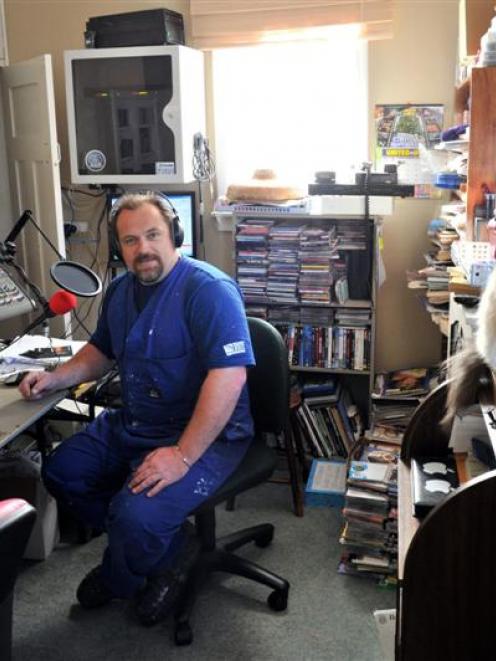 Dave Ure behind the microphone at his radio station, 107.5Rocks Dunedin. Photo by Gerard O'Brien.
From his Dunedin man-cave Dave Ure broadcasts to the world, but he needs help from a higher place so more locals can tune in to his radio station.

Frustrated at not being able to find a locally-based rock radio station, the 42-year-old decided to do the next big thing - start his own.

While anyone can live-stream 107.5Rocks Dunedin, local listeners are largely limited to those who live within a 4km radius of his St Kilda home.

The aerial technician is seeking a home or at least a spare rooftop along Dunedin's hilly suburbs to put a 1.5m radio-station aerial, which would allow more people to tune in.

He had spent thousands of dollars in equipment and three months painstakingly editing the seconds of silence at the beginning and end of his collection of more than 9500 rock songs.

"To be honest, I don't care if nobody listens. I did this as a relaxing thing for me."

Broadcasting 24/7 on a reserved free FM frequency, he is even able to tune in to his station from his work van and listen to the occasional advertisement - his own - and even presents his own show on Friday nights, called "the Friday few". Mr Ure has a beer or two while playing requests from listeners and said it was great to be on the air again.

He first became involved in radio more than two decades ago, when he volunteered for a midnight-to-dawn shift while continuing with his day job.

Various paid stints at stations across the country followed, until he decided to leave radio to better support his family.

He says he loves being back on the air, and while "I am not here to make any money out of it", he hopes to give local rock bands some air time, and in the future give budding radio announcers a break.