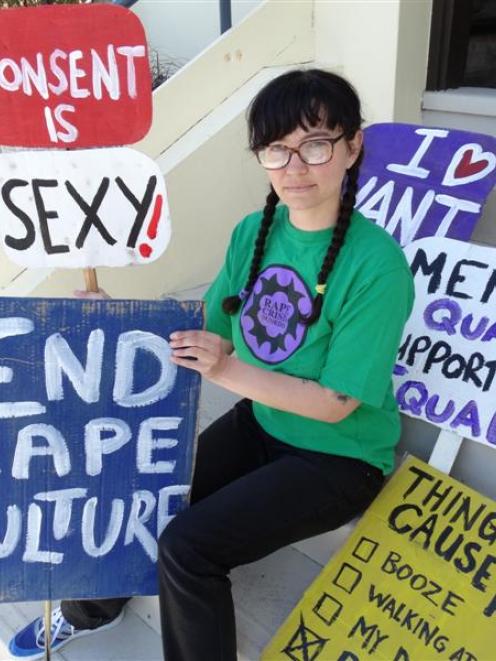 Photo supplied.
More than 130 people, many of them University of Otago students, took to the streets of central Dunedin on Saturday during a march and rally organised by Rape Crisis Dunedin as ''outrage'' continued over an explicit Facebook page.

The now-defunct Rack Appreciation Society Facebook page, which had 2000 members, showed explicit photographs of women without their consent.

The Freely and Willingly March, which aimed to highlight consent issues, was not organised in response to the page, which had been closed, march organisers said.

But participation in the march nevertheless reflected ''outrage'' over the display of explicit photographs on the page, they said.

Ms Smith acknowledged the ''women here who have been affected by the Facebook group in which men shared nude photos of them without consent''.

''This is exactly the kind of behaviour that Freely and Willingly stands against.''

One common response to the so-called Rack Appreciation Society had been to ''blame the women and claim it was just a bit of fun''.

In her address, Ms Smith highlighted ''the prevalence of sexual violence'' in New Zealand and emphasised the importance of genuine consent.

Coercion could take many forms, including pressures exerted in the workplace or family.

''Systematic change'' was needed, she said.

Otago University and the Otago Polytechnic needed to ensure they had ''adequate means of addressing complaints of rape and abuse''.

Other rally participants also spoke about their concern over aspects of what they saw as a ''rape culture'' in the city, and several young women said they had often been subjected to sexual harassment unless accompanied by a male partner.