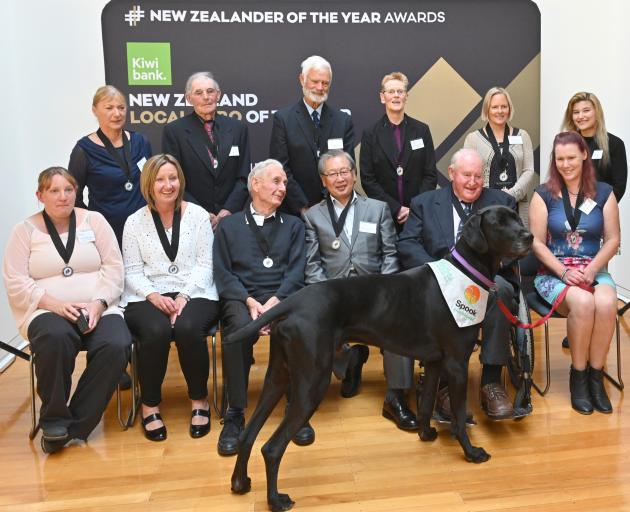 Specially-made medals were presented by Dunedin Mayor Dave Cull at the Dunedin Public Art Gallery, as part of the New Zealander of the Year Awards.

"Our region's 15 local heroes demonstrate the acts of charity, commitment and selflessness which is what holds a community together,'' he said.

"Many of these individuals are inspiring members of our community who have all uniquely touched the lives of others.

"The awards continue to be the perfect opportunity for our community to acknowledge these people and their efforts in making Otago a better place to live.''

This year, 322 medals will be presented nationwide, and one New Zealand Local Hero of the Year winner will be announced at the New Zealander of the Year Awards Gala in February next year.

Kiwibank chief executive officer Steve Jurkovich said while some recipients may not see themselves as heroes, their stories of courage, charity, achievement and ambition made them heroes.

"It's our chance to say thanks and show each and every one of them just how special they are.''

Helps school committees, runs gala days and works with the Jaycees in Mosgiel.

The former Dunedin mayor (2004-10) is a member of the Constitutional Advisory Panel, a trustee of the Otago Community Trust and chairman of the National Chinese Poll Tax Heritage Trust.

He also serves as the head of the Gambling Commission, a government-appointed panel which regulates casinos.

Has run Mosgiel Veterinary Services for the past 14 years, caring for SPCA animals in need.

She donates more than $100,000 of her time and services each year, spaying and neutering cats and providing treatment for animals in need.

Passionate about the wellbeing of animals, she even provides care for pets whose owners cannot afford treatment costs.

Is manager of Penguin Rescue, a charity providing a sanctuary for endangered yellow-eyed penguins.

She also runs the organisation's website/blog and is active within the penguin colony, laying traps to catch predators and teaching others in the community how to care for injured or sick penguins.

Is an advocate for young people with disabilities in her community and New Zealand.

She established the Good Life Charitable Trust to raise funds for activities for youth with disabilities.

She recently raised $7500 for the purchase of a specialised tandem bike so that these youth, who cannot ride bikes, can experience the Otago Central Rail Trail.

She has also been involved with the Special Olympics, the Awesome Group and Clyde School.

Is a founder of Steampunk HQ in Oamaru - New Zealand's premier steampunk museum, gallery and workshop.

Launched in 2011, Steampunk HQ has become a significant tourist drawcard, and in 2012 it was rated as one of New Zealand's best new attractions.

He is also the manager of the Canterbury Rams basketball team.

Is a retired farmer who has spent the past two years restoring wetlands on his property, turning the swamp into a bird reserve.

He has built a 3km track through a portion of his farm, lining it with native trees, for community use.

Is the University of Otago's first Maori Professor of Law.

She has won the Prime Minister's supreme award for tertiary teaching and has also been made a Fellow of the Royal Society of New Zealand.

In 2012 she completed a PhD at the University of Victoria in Canada.

Is a senior lecturer in physical activity and health at the University of Otago.

After a friend died of breast cancer, she founded an on-campus gym for women battling the disease, which now has 140 members and is a place for the women to learn more about exercise and health.

Many of the gym's instructors are her students, and some continue to stay involved after their finishing their studies.

She often donates her time and expertise to people seeking help, providing advice on appropriate products, installation and how to dispose of expired seats.

Is a teacher aide at Brockville School in the mornings and regularly spends her afternoons and weekends supporting local charities with her Great Dane, Spook.

The pair volunteer with more than 20 charities, including Ronald McDonald House, Autism NZ, Red Puppy Appeal and Animal Rescue. She also works with Life Matters, a suicide prevention trust, and Spook is an official ambassador.

Converts old films to DVD using a combination of technology he has developed since retiring.

He spends up to 20 hours a week in his workshop, converting film for people at no charge.

He has also helped convert film for the University of Otago.

Was involved in a campaign to help a Sri Lankan family facing deportation.

She also runs the community project Baskets of Blessings, which provides gifts and food for families experiencing trauma or hardship.

She recently began the community group Lets Eat, which provides cooked meals for people in need.

Built a nesting platform in the Wanaka marina in 2012 after noticing a pair of southern crested grebes were failing to breed.

Six years on, the project has seen an increase in the bird species, and this year a total of 126 breeding attempts and 203 fledged chicks have been reported.

He has also inspired others in the community, including school children, families and local businesses, to join the crusade to save the threatened species.

Is a University of Otago student involved in the queer community.

Working for the university's student association, she supports her fellow students on sexuality issues.

She also sits on the association's welfare committee, works for Rape Crisis and volunteers for Alphabet Soup, a support group for queer youth.

Pioneered wild deer recovery in the 1960s, using helicopters to hunt and recover New Zealand's furtive mountain deer, which were then classified as noxious animals.

An aviation enthusiast, he also founded the internationally-acclaimed Warbirds over Wanaka air show in 1988.

The show is now a biennial centrepiece of Otago's tourist attractions, bringing tens of thousands of visitors to New Zealand.