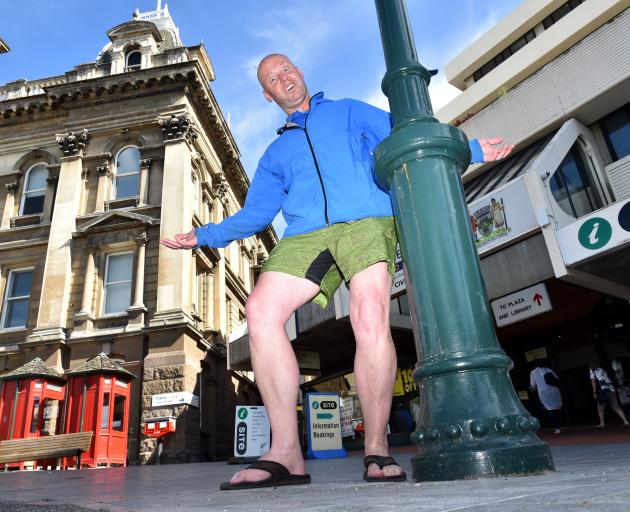 DX Mail Dunedin branch manager Dave Bourke presumed the central Dunedin mailbox had been stolen. Photo: Gregor Richardson
In an embarrassing blunder, DX Mail complained to the police about the theft of its Octagon mailbox in Dunedin after its own contractor moved it.

Mr Bourke then discovered a senior manager in Auckland had arranged for a contractor to remove it because the Dunedin City Council objected to its location.

The mailbox was taken to Christchurch. The company is trying to find another central city site in Dunedin.

"So now I’ve got to go into the police station and withdraw the report."

Mr Bourke had even checked with the DCC before reporting the theft to rule out the possibility it was temporarily shifted for New Year celebrations.

Mr Bourke said that, in the past, the mailbox had been wrenched free a couple of times by drunks who wheeled it away and discarded it nearby.

He spent time scouring the area around the Octagon before reporting the incident to police.

The mailbox was chained to a street light in the Octagon. Asked if he was annoyed with his superiors, Mr Bourke said he was not allowed to comment.

"We have a strict media policy - anything to do with media must be done via Auckland.

"I was a little bit outside the realms talking to you today, but it was the best way to get a result if it had been stolen."

It had secured contracts with DHBs and other government agencies and took its responsibilities as a mail carrier seriously, Mr Bourke said.