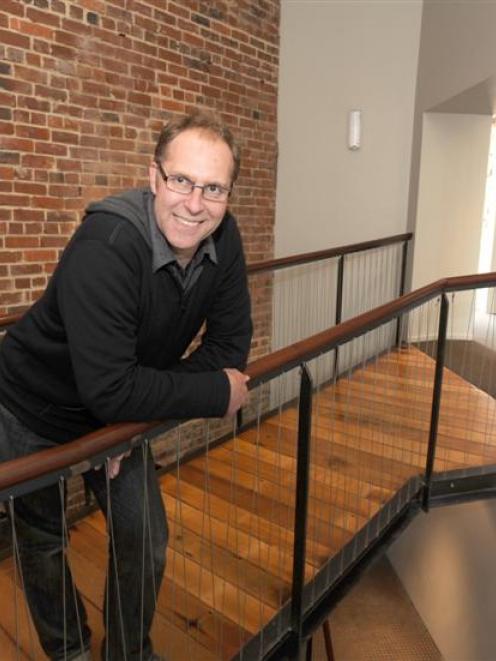 Structural engineer and developer of historic buildings Stephen Macknight in the restored Clarion Building in Princes St (below).
Our series on the future of Dunedin's industrial and commercial buildings continues. Today, Debbie Porteous examines the realities of saving our heritage.

Everyone loves to see a historic building refurbished and in use, but there are inevitable hurdles to such renovation and reuse, especially when they involve buildings less fabled or publicly admired.

The numbers have to add up, since the cost of refurbishing and maintaining older buildings is inevitably higher than a new build of the same scale. 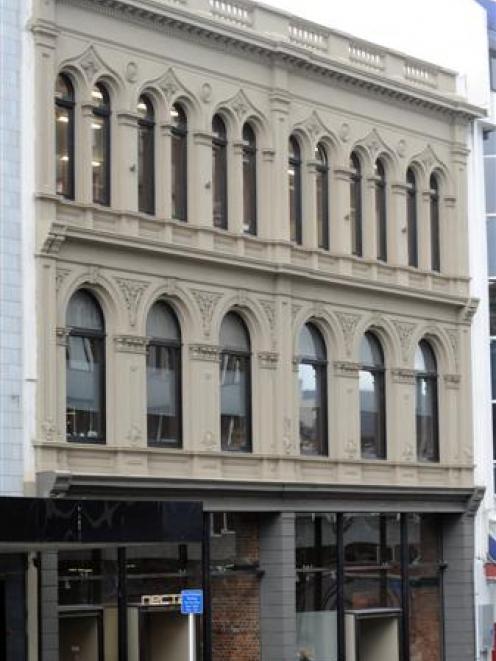 And the amount of local government funding available through heritage programmes is often relatively meagre compared with the amount of work and financial outlay required.

Some say if we want to get serious about preserving heritage buildings, then maybe we are going to have to rethink how we go about paying for it.

Others say if you buy a heritage building, then you should be prepared for what it might cost you and stop complaining.

But the sometimes high cost is not the only hurdle facing those contemplating restoring a historic commercial or industrial building.

When the Dunedin City Council launched its heritage strategy in 2007, it commissioned a research report from consultants Opus on the problems and opportunities associated with restoring and reusing the city's historic commercial buildings.

That December, a discussion document was produced outlining a series of barriers the 13 contributors to the research believed people faced in redeveloping such buildings.

Those included Building Act requirements, the cost of buildings, rates and insurance, and the market for redevelopment, which contributors said was problematic given Dunedin's large existing stock of buildings, low population growth, low average income and low demand for space.

"In other words, we have more heritage buildings than we can use and redevelopment ends up being stealing from one to pay the other."

The report also identified several administrative and regulatory hurdles, including problems with the perceived attitude of council building control and planning department staff, and slow and inconsistent application of rules.

It also noted planning requirements and heritage status came with their own sets of problems.

From the point of view of people involved with redeveloping heritage buildings, the major impediment to redevelopment certainly appears to be the costs.

Some simple regulation changes could be made to help owners, Dunedin structural engineer John Heenan said.

As an example, he suggested allowing restoration or strengthening work to take place in a staged manner.

That would mean landlords' tenants - whose rents owners often relied on - would not have to be moved out and owners could continue to have that income while work was carried out.

The cost of building strengthening work was particularly prohibitive, and he hoped this year's review of the council's dangerous, insanitary and earthquake-prone buildings policy would involve consultation with professional bodies, building owners, landlords associations and the New Zealand Historic Places Trust. .

"The reality was that, even though there was partial collapse of buildings [in Christchurch], in my opinion, things held up as well as could be expected, if not better than expected, given the size of the earthquake. So I hope they [the DCC] don't go racing off in some knee-jerk reaction to it," Mr Heenan said.

His colleague, structural engineer and developer of historic buildings Stephen Macknight, said the obstacles to restoring old commercial buildings began with the owners themselves, their available finances and their passion and vision for a building's end use.

Finding tenants in the present economic environment was difficult and probably much more formidable than in 2007, when the Opus report was written.

And it was tougher for owners to secure finance.

Banks were less inclined to lend money and favoured clients who had a definite tenant signed up for the end product.

Yet often, especially with a heritage building, it was difficult to find a tenant until after the work was completed, Mr Macknight said.

However, he believed the council was getting better at dealing with owners' problems.

"They can see what the issues are. They are trying to be helpful. Everyone is sort of aiming towards the right direction and it is difficult, because there are so many rules and they are all different."

Heritage consultant Guy Williams said it was vital people did the research and sought advice before buying a building, even if it appeared to be a bargain investment.

Some people fell in love with a building, but what it was going to take, personally and financially, to restore it was beyond them.

Industrial buildings pre-1900 were a particularly difficult category of building to restore.

Many had suffered years of neglect and decay because of successive owners' economic circumstances.

Their structural timbers were often embedded in decaying masonry and crumbling mortar, he said.

"It's really important to be forewarned, otherwise you're on a highway to hell and no-one wins in that situation."

The job of helping lead the Dunedin City Council to find some solutions to the issues identified in the 2007 report, and since, belongs to council heritage policy planner Glen Hazelton.

He has an instrumental role in the heritage buildings economic reuse steering group, established last year, whose purpose is to cast the net a little wider than the Opus research and try to get to the root of specific problems and work out some potential solutions and what role the council would play.

An initiative is already being trialled where the council brings in a team to work with building owners during the consent process.

A report containing such potential solutions is due to go to the council later this year.

Short-term to mid-term solutions offered in the report were likely to be around areas where money was already spent, but with a view to spending it more smartly, Mr Hazelton said.

Some of the problems owners faced would be beyond the council's ability to solve, but the group's work showed ensuring the economic reuse of historic buildings would require a partnership between the various parties - central and local government, the historic places trust and owners.

• Two Dunedin citizens have their say