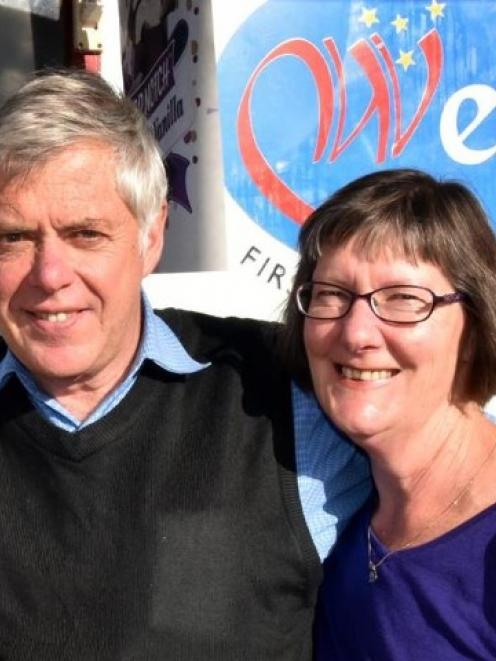 Wests (NZ) Ltd operators Alf and Kaye Loretan are relieved that the shop’s liquor off-licence has been renewed. Photo by Craig Baxter.
The owner of a Dunedin soft drinks institution says ‘‘common sense'' has prevailed after the district licensing committee agreed to renew its liquor off-licence.

Wests (NZ) Ltd, which has been trading for 139 years, has been selling alcohol as well as soft drinks and flavoured syrups from its South Dunedin factory store for much of that time.

The company hit a snag when an application to renew its existing off-licence, needed for alcohol sales, was opposed by Southern District Health Board medical officer of health Dr Marion Poore.

The district licensing committee yesterday agreed to renew the licence. The initial hearing was held last November. Wests director Alf Loretan said he and wife Kaye were relieved at the decision, which was a victory for ‘‘common sense''.

‘‘Hopefully, it's plain sailing from now onwards,'' he said.

The fight to have the licence renewed had been ‘‘extremely stressful'', but he steered clear of criticising the process.

‘‘It is what it is. We can't change what's happened in the past and we are happy to leave it at that.

‘‘We just want to move forward now and get on with the day-to-day business of trying to run a sound business and being a good corporate citizen.''

He thanked the community for its support.

‘‘We couldn't have done it without the huge support ... of South Dunedin and St Kilda.''

That meant younger customers could be exposed to alcohol advertising and products, despite curtains put up until 9am to screen off the alcohol.

In contrast to Dr Poore's view, the district licensing committee's decision said the committee was satisfied with measures Wests had taken to separate alcohol from the counter area of the premises, saying ‘‘to do any more would be excessive''.

‘‘While it is not ideal that [sweets and ice-cream] are sold in the premises, the applicant has taken every reasonable step to shield young people from the sight of alcohol and its associated signage.''

The report noted there had been no problems associated with the premises and police were not opposed to the licence being renewed.

In a short emailed response last night, Dr Poore said the health board would need more time to consider the decision and ‘‘any further possible actions''.