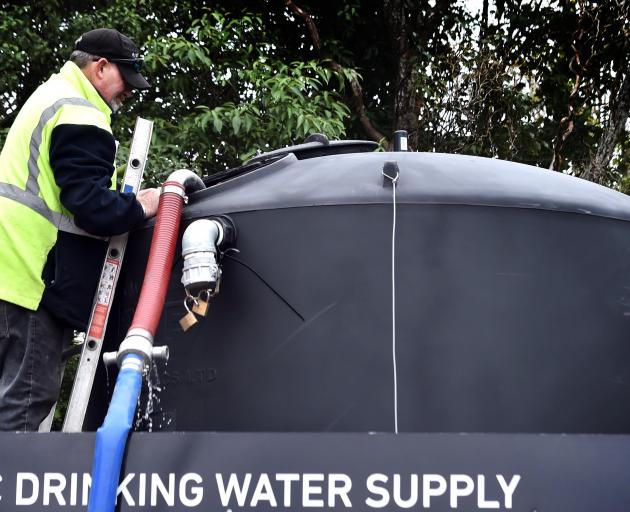 Filling up a water tank in Kildare St, Waikouaiti, this week is Steve Barnes, of Dynes Transport. PHOTO: PETER MCINTOSH
Children at Waikouaiti School have got used to not drinking from water fountains.

Almost six months after residents of Waikouaiti, Karitane and Hawksbury were told to stop drinking water from the Waikouaiti town supply because of intermittent spikes of lead being detected, a do-not-drink notice remains in place.

Waikouaiti School principal Mark Edwards said the children were used to the situation now, but everyone was keen for the water supply to be declared safe to use again.

The Dunedin City Council had provided the school with a 5000-litre tank and 20-litre storage containers were distributed around classrooms, he said.

The notice advising residents not to drink tap water, nor use it for food preparation, was issued on February 2 and the council had hoped to lift it by the end of last month.

However, council officials and Public Health South need to be convinced the supply was safe, and their discussions have continued in recent weeks.

A positive test for E. coli at Karitane this month reinforced that people should not be drinking the tap water there.

A city council spokesman said there had been no further signs of E. coli.

The council was continuing to work with Public Health South and the do-not-drink notice would be lifted once it was safe to do so, he said.

Testing revealed some lead readings at concerning levels before the notice was imposed, but not since, and the council has replaced old pipes in Waikouaiti to remove one possible source of contamination.

Other measures include the council importing a lead monitor from Belgium.

Residents of the three East Otago communities had their blood tested and it was determined long-term exposure to lead from the water supply was unlikely.

Public Health South has not spelled out publicly the nature of any concerns that remain.

Waikouaiti Coast Community Board chairman Alasdair Morrison said people were frustrated, but they had to wait patiently for the problem to be solved.

He indicated health authorities wanted to make sure there could be a high degree of confidence the supply was safe.

‘‘We’ve been waiting a long time now, so what’s another few days?’’

There does not seem to be any logic to this angst providing lead issue in the water supply.
Somehow this whole situation that defies gravity, common sense & has a "to be sure, to be sure" feel about it.
Looks like a waste of money chasing shadows whilst spending those ratepayer dollars on contractors fluffing about looking busy burying plastic pipes that will be there in the ground in a thousand years.
Thats it !.. It's just an employment scheme for future land development.
Tilting at windmills comes to mind...