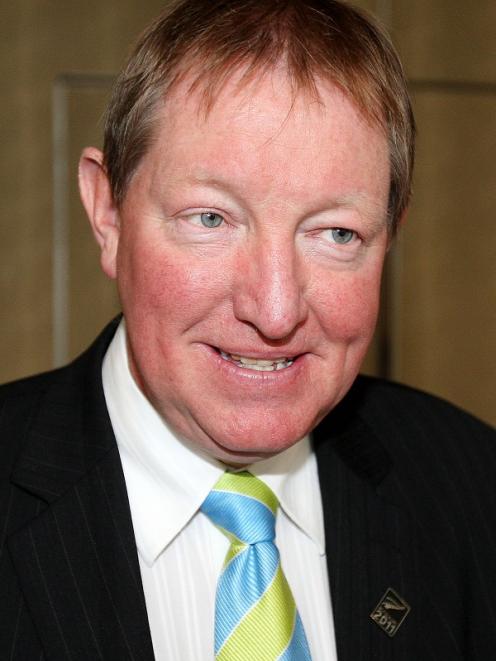 Nick Smith
The decision by Local Government Minister Nick Smith to resign his portfolios, hours after meeting southern mayors in Dunedin, may throw the timetable for local government reforms into doubt.

Hours later, after a hurried flight back to Wellington, Dr Smith announced he would resign his ministerial posts.

Dunedin Mayor Dave Cull told the Otago Daily Times the resignation came as a surprise, as Dr Smith had appeared in "fine form" in Dunedin.

Council chief executive Paul Orders said he was also "absolutely" surprised, as Dr Smith had not seemed on the verge of resigning, while Central Otago Mayor Tony Lepper said there was no hint of the drama to come.

"That [the ACC controversy] was never mentioned until he walked out of the room.

"He seemed very composed and relaxed."

The announcement left Mr Cull wondering if the reform timetable announced by Dr Smith on Monday was still achievable.

Dr Smith had hoped to introduce the first four of eight changes to Parliament in May and have them passed by September, so they would be in place by next year's local body elections.

Mr Cull said it was important to have some of the changes - for example, relating to ward boundary changes or council amalgamations - in place before the next council term began in 2013, rather than introducing them mid-term.

He expected the Government would "follow through" with the reforms, but was less sure about the timetable.

"Until there is a new minister firmly in the position, they might not have quite the impetus that they would have had."

Mr Lepper agreed, saying he expected delays could follow while Dr Smith's replacement was brought up to speed.

"You'd imagine there might be [delays], wouldn't you? Obviously, a new minister has got to get up to speed with his advisers."

A spokesman for Acting Local Government Minister Gerry Brownlee denied that, telling the ODT it was "still the Government's intention to meet the timetable".

Earlier, Messrs Cull and Lepper emerged from yesterday's meeting with Dr Smith enthusiastic about much of what they had heard.

That was despite Dr Smith indicating the reforms could prevent future investments by council-controlled organisations aimed purely at generating a profit, Mr Cull said.

Delta Utility Services - which was owned by the DCC - had purchased 100 sections at Jacks Point, in Queenstown, in 2009, in a deal said to be worth up to $3 million, and planned to develop their infrastructure before selling them at a profit.

The profit was expected to help boost the company's dividend to the council, which helped offset rates.

Mr Cull said he questioned Dr Smith about that scenario yesterday, and was told existing investments were "fine" but councils may need to look at similar investments "with a harder eye" in future.

The test would be whether such investments provided a public good, and Mr Cull's view was using the profits to help offset rates would be.

Mr Lepper was impressed by much of what he heard from Dr Smith, but remained concerned about the impact Government reforms would have on council spending in non-core areas.

His council was expecting above-inflation rates rises for the next decade to pay for infrastructure upgrades, but Dr Smith had indicated "7%-10% year-on-year is not acceptable".

That would mean his council would still have to consider cuts in other areas - a concern Mr Lepper voiced earlier this week.

"That still remains an issue for us," he said yesterday.

"If we have got to stick to a cap, even if it's a soft cap, infrastructure stays and your other spending might have to be modified. But we've got a bit of time to work on that."