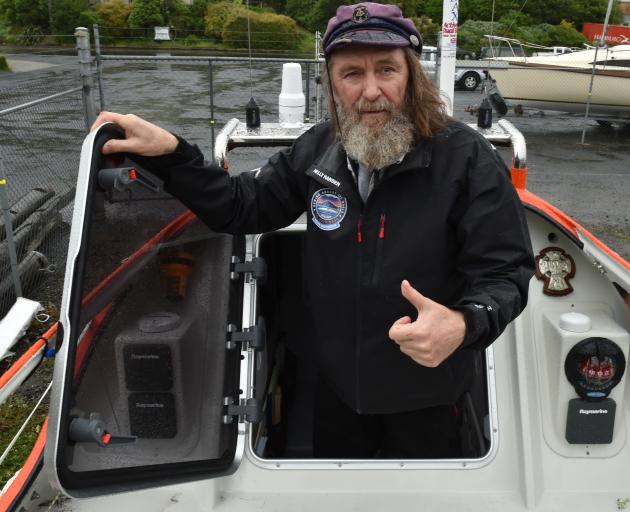 Russian adventurer Fedor Konyukhov completes checks on his $390,000 high-tech carbon fibre/kevlar row boat as he prepares to leave Dunedin on the first leg of his circumnavigation of the world. PHOTO: GREGOR RICHARDSON
While many griped and grumbled during yesterday's persistent rain and cooler temperatures, it failed to register on Russian adventurer Fedor Konyukhov's radar.

For him, it was positively tropical, compared with the environment he is about to tackle.

The 66-year-old plans to row a boat around the Roaring Forties and the Furious Fifties, from Dunedin, past Cape Horn, South Africa, South Australia and back to Dunedin, where he will encounter icebergs, sub-zero temperatures, winds over 100kmh and waves reaching 15m along the way.

The round-the-world record attempt is just the latest in a long line of adventures he has completed over the years.

Mr Konyukhov, an explorer, Orthodox priest, author and artist, has circumnavigated the world four times - twice by sail boat and twice by hot air balloon - has crossed the Atlantic 15 times, climbed Mt Everest twice and is the only person to have reached the Earth's five "extreme poles".

Speaking through an interpreter, Mr Konyukhov said this adventure would be the most difficult he had attempted.

Despite his extensive experience journeying through extreme and inhospitable environments, there were many things he feared about this voyage.

"Icebergs, strong winds and the cold - that's the biggest worry."

To date, no-one has successfully rowed across the Southern Ocean and round Cape Horn.

He said his British-built, 9m-long ocean rowing boat, Akros, would be his haven from the elements.

It had been specially built to withstand freezing temperatures and heavy seas.

Along with enough dried food to last 120 days and several changes of clothing, there was little room for any creature comforts.

He said the only comforts on board were a solar- and wind-powered heating system which would heat the floor of his cabin, and a bottle of whisky.

The boat was now being put through sea trials and he hoped to begin his odyssey within the next 10 days, depending on the weather.

The 27,000km journey around the globe would be completed in three legs - each lasting about 120 days.

Mr Konyukhov is now waiting for a strong northerly to help push him southward into the Roaring Forties, where he will then head east towards Chile.