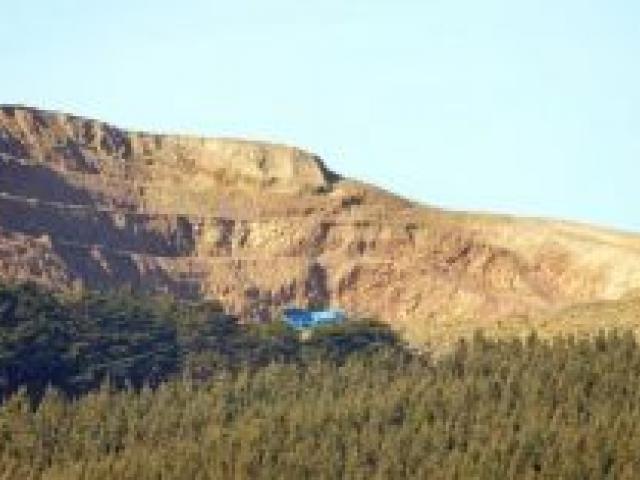 The Jaffray Hill quarry on the lower slopes of Saddle Hill, from Gladstone road last Tuesday. Photo by ODT.
Two Dunedin landowners are arguing their case to subdivide more of Saddle Hill to the Environment Court this week.

The appeal relates to a 2013 council hearings committee's decision to decline consent for three landowners to subdivide four 15ha properties.

The related applications would have created 16 undersized rural sections spread across 60ha on the slopes of Saddle Hill.

The third party to the original appeal, Bluegrass Ltd, has since withdrawn from proceedings.

Bluegrass Ltd's property that was originally part of the proposal was between Mr Fisher and Mr Taylor's properties.

The lots would be undersized in a rural-zoned area.

The council committee cited concerns including the threat to the area's rural amenity and district plan integrity, and planners suggested the application might have been more appropriate as a plan change.

Mr Fisher and Mr Taylor's lawyer, Trevor Shiels QC, told the panel the appellants did not believe that was the case.

The council itself had previously said the area was a ''transitional zone'' and the plots of land were on the ''natural edge'' of the city.

They sat among already consented building platforms and the land around them had a range of property sizes, almost all with houses.

The district plan had one rural zone, despite the array of rural environments it covered, though previous district plans had differing zones.

Granting these consents would not imperil a plan that was significantly out of date, he said.

Even if the proposed subdivision could be done as a plan change, that could not be given any weight in a resource consent application, he said.

Mr Fisher is already embroiled in a legal battle with the council over Saddle Views Estate Ltd's quarrying of Jaffray Hill.

The company, the 100% shareholder of which is the welfare fund of Amalgamated Workers Union New Zealand Southern Inc, is appealing an Environment Court declaration, originally sought by the council, that no consent exists, or ever did, for quarrying on the hill.