Safe route for kids 'matter of life and death' 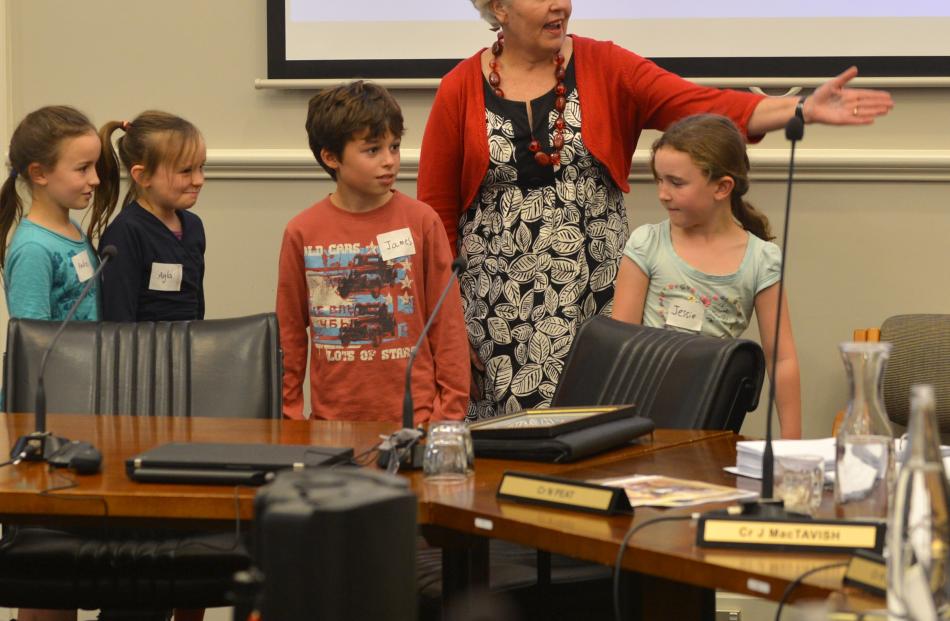 Christine Garey and children from Broad Bay School make their arguments in favour of a new cycle/walkway being built in their community sooner, rather than later, to Dunedin city councillors yesterday. Photo by Peter McIntosh.

The discussion over which end of Portobello-Harington Point Rds should be improved first was turning into a winners and losers debate, Dunedin city councillor Kate Wilson noted as people continued to air their views on the topic at the council's annual plan hearings yesterday.

But her suggestion of a targeted rate for Peninsula ratepayers to cover the cost of bringing all the road works forward, thereby producing a win-win for both ends, gained little traction with Peninsula submitters, who asked why they should pay more for something everyone in the city would use.

Meanwhile, children were brought in to illustrate what was at risk if the cycle-walkway was not added to the Portobello-Broad Bay section of the road first, while a cardiologist argued that completing the Vauxhall-Glenfalloch end first would profit the most people and have a public health benefit, too.

The council has sought feedback in its draft annual plan on preferred sequences for completing remaining sections of the road, to be finished over the next 10 years.

More individuals appeared on the second day of hearings yesterday to express their support for the Vauxhall end to be completed because of the safety issues there, including Cove resident Vanetta Rosenberg, who also noted it was a shame the council's submission form on the annual plan almost encouraged communities to oppose each other.

Others, such as Portobello mother Zoe Mitchell, who told councillors she opposed assertions made by cycling advocates Spokes on Wednesday that there were already safe streets for kids to walk to school in Portobello and Broad Bay, came to argue for that end to proceed next.

Otago Peninsula Community Board chairwoman and Broad Bay resident Christine Garey said doing that section of the road next was a ''matter of life and death'', due to the dangerous nature of the road.

The possibility the sequence of the work might change had a large majority of the peninsula community up in arms.

There were convincing arguments for choosing the peninsula communities first, she said, including that there were more residents, several schools and preschools, a lot of community activity and an increasing crash trend.

It was clear who the council should choose, even though the council seemed ''hell bent'' on starting the work from the city end, she said.

Dunedin cardiologist Dr Gerard Wilkins said it would be wrong for him, as a health professional, not to advocate for the other end to be done first as completing the link with Macandrew Bay would encourage more people to cycle/walk further.

It was nonsensical that people now had to drive to Glenfalloch first to undertake that activity, he said.

Doing that end first would be in the best interests of the vast majority of the city's citizens and since Dunedin ratepayers were paying in greater portion than Peninsula residents, it seemed only fair to complete the section closer to Dunedin first.

The Macandrew Bay resident said he agreed with Mrs Garey's sentiment, but said he also had a lot of children who had no safe access to Portobello Rd or their school.

''So what can be said at one end of the Peninsula can clearly be said at the other.''