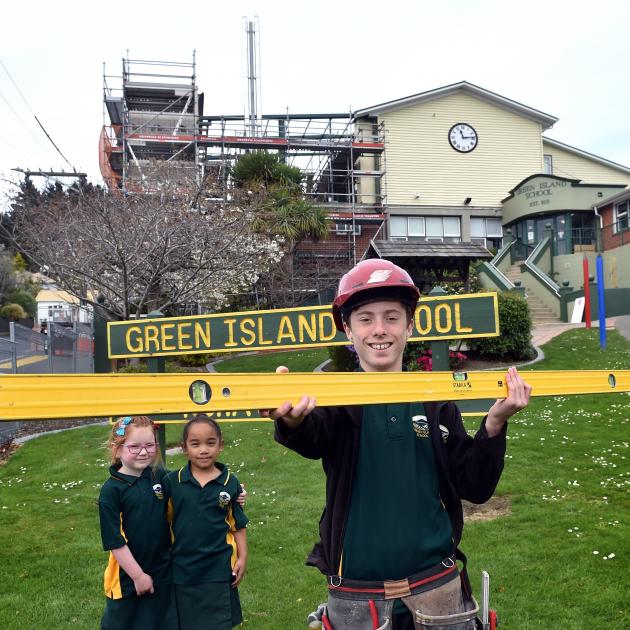 Excitement is building for Green Island School pupils (from left) Lucy Taylor (5), Tepaeru Vahua (5) and Billy Black (13) as the school’s first development in nearly 50 years starts to take shape. PHOTO: PETER MCINTOSH
Sometimes, when life gives you lifts, you can turn them into lighthouses — quite literally.

Green Island School is in the process of upgrading its premises, and as part of the $2million Ministry of Education-funded project, a lift is being installed to give better access to pupils with disabilities.

Principal Steve Hayward said construction of the lift shaft had begun on the street front and, rather than keep it hidden within the existing building, it was being made to look like a lighthouse.

"Why? Because the school is a beacon school for Play is the Way — an educational programme that teaches social and emotional skills using guided play, classroom activities and an empowering language."

He said the programme gave teachers the tools to deal with classroom issues such as anxiety about Covid-19.

The upgrade is the largest to take place at the school since the 1970s and pupils, parents and the wider school community were becoming increasingly inquisitive about what the lighthouse would look like.

But to date, the school had managed to keep the architectural design under wraps, he said.

"We are trying to keep it a surprise until a special unveiling when it is finished."

However, he admitted it would not be easy to keep hidden because within the next month or so, people would be able to start working out what shape and size it was going to be.

While he hoped the lighthouse would become a landmark, his main ambition was for it to attract more pupils with disabilities to the school.

"Green Island School has been providing education in the area for 167 years — one of the longest in New Zealand — and now it will continue to shine.

"Our future is bright."

It was hoped construction would be completed within the next six months.