Schools given iPads through initiative 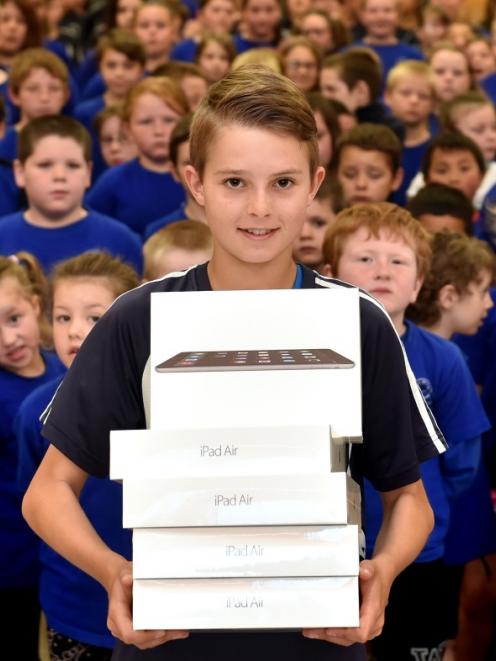 Carisbrook School pupil Noah Scott (13) with some of the iPads given to the school yesterday. Photo by Peter McIntosh.
Two Dunedin schools have received a boost with some of the latest technology coming to their classrooms.

Carisbrook School and Brockville School were the proud recipients of 30 new iPad Airs yesterday, donated through the Laptops for Learning programme.

The programme is a joint initiative between The Warehouse and children's charity Variety, which provides iPads to low-decile schools across New Zealand.

Carisbrook School principal Ben Sincock told pupils at an assembly at the school yesterday the iPads would be a welcome addition.

''Schools aren't funded nearly as well as they were 10 years ago,'' he said.

''What that means for us is the money we were planning to spend on IT [information technology], we still can, but it means we get double the number of devices for you to learn on in your classrooms.''

The school was working towards having one such device per pupil within two years and yesterday's injection had expedited that aim, he said.

Variety chief executive Lorraine Taylor said the initiative was a way of ''levelling the playing field between the haves and have-nots''.

''We hear a lot about the digital divide that's happening in our societies.

She and Mr Walsh also visited schools in Gore, Mataura and Nightcaps yesterday and would visit schools in Invercargill and Bluff today.