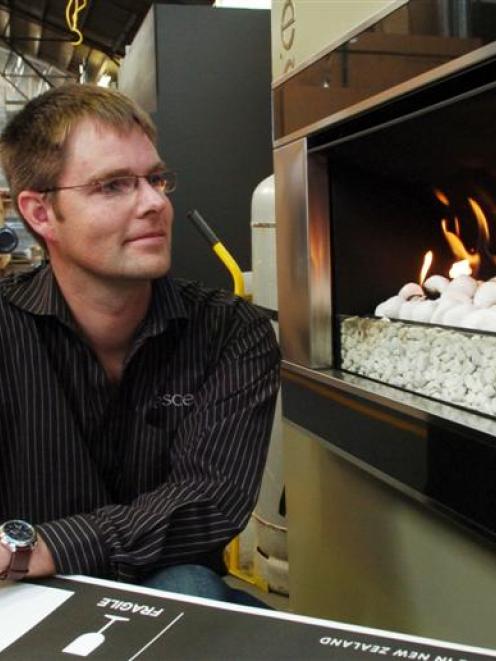 Escea managing director Nigel Bamford with an outdoor gas fire which will be displayed in the New American Home as part of the International Builders Show in the United States next year. Photo by Gerard O'Brien.
A Dunedin-based manufacturer is blazing a trail into the United States gas fire market after gaining selection for the New American Home show for the second year in a row.

The New American Home is a display house built as part of the International Builders Show, which offers real-world demonstrations of the latest concepts in architecture, construction techniques, new products and lifestyle trends.

Escea New Zealand Ltd was reselected to install its cutting-edge indoor and outdoor gas fires in the display house.

Managing director Nigel Bamford said the International Builders Show was the largest annual light construction show in the world, with more than 1.5 million square feet of the latest and most advanced building products and services on display.

"To get in the showcase house once is a coup. But to get selected twice is very rare."

More than 60,000 builders, architects and interior designers would visit the show and would provide the Dunedin company with invaluable exposure, he said.

"America is the largest gas fire market in the world, with over a million units sold there each year.

Gaining a share in the market would be a "long and hard road", but the exposure from the New American Home was a step in the right direction, he said.

"This particular piece of exposure is a step toward gaining some sales momentum, which is difficult to do in the current economic environment."

Mr Bamford said his products were selected for the show house because Escea was the only company which manufactured wide-view (linear), modern-styled, outdoor gas fires for the North American market.

The indoor fires are remote controlled and can be activated by cellphone or web-based interface so people can turn on their fire from their computer or phone before leaving work.

They are also automatically adjusted to a thermostat setting and wireless controls are included as standard, he said.

"At Escea, we do not make gas appliances - we make furniture with flames."

Escea launched its products New Zealand-wide in 2005. Since then, its markets have spread like wildfire across New Zealand and Australia.

In the past four years, Escea has grown from six to 40 employees, with the business expanding an average of more than 520% per year.