Services a welcome escape from office 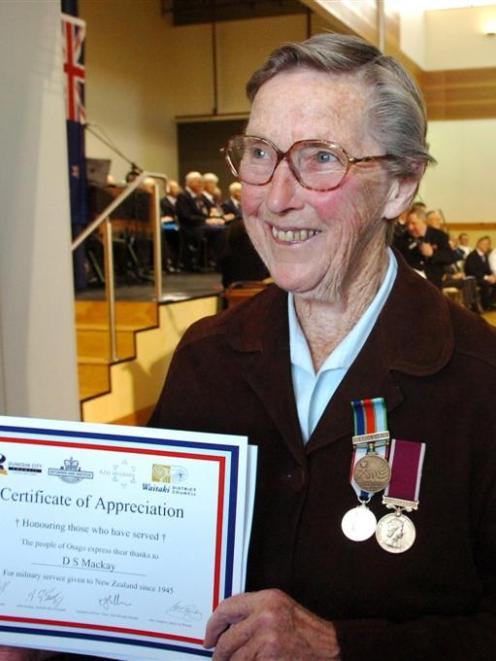 Donella Mackay (80), of Karitane, holds her certificate of appreciation at the Waikouaiti Events Centre on Saturday. Photo by Jane Dawber.
Donella Mackay was never one to worry about getting grubby or breaking nicely manicured fingernails.

That was why the Karitane 80-year-old knew as soon as she sat behind a desk in her first office job, that it wasn't going to work out.

Ms Mackay, or Donny as she is better known to her friends, recalled the excitement when she joined the Royal New Zealand Navy in 1949, where she served two years in Wellington.

"If I stayed on, I would have been posted to Auckland. But I wanted to go south, closer to home. So I did a stint of clerical work at the hospital in Dunedin.

"It didn't take long for me to work out that working indoors wasn't for me.

"It was too monotonous. So I joined the army."

On Saturday, Ms Mackay was one of about 60 war veterans who received awards at a presentation at the Waikouaiti Events Centre.

Although Ms Mackay never saw active service overseas, in her 16-year career in the New Zealand Army she reached the rank of Warrant Officer, and is one of a very rare breed of women who have served in both the navy and the army.

When it was suggested the skills she learnt in the army would be useful keeping a brood of children in order, she said: "It would have, if I had any".

Her commitment to her military career meant she never married or had family.

The service was one of two held in the area at the weekend. Another was held at Puketeraki marae earlier in the day.

Dr Mapp described the event as an "amazing community event, where we all get to recognise the service of people in our community."

"There is something about the service under a code of discipline ... that brings people together in a way that few other things do.

"We as a nation, we as a community, have sought to value that service," he said.