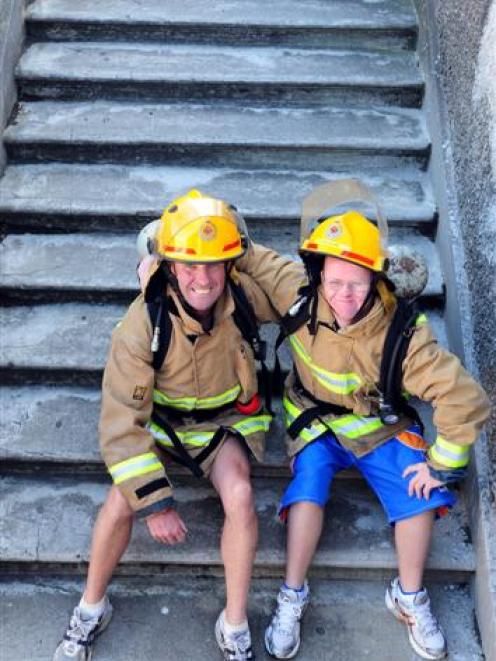 Firefighter Richard Yardley (left) and his ‘‘technical assistant'' Brodie Carvalho take a breather while training to climb Auckland's Sky Tower as part of the annual firefighters' fundraising challenge next month. Photo by Craig Baxter.
Brodie Carvalho is going all the way to the top - the top of Auckland's Sky Tower, that is; and he will probably get there faster than most.

The 28-year-old special Olympian from Mosgiel will be the first person with Down's syndrome to don full firefighting kit and take part in the annual Sky Tower Challenge next month.

Up to 200 firefighters, Mr Carvalho and other invited participants will climb the 1029 internal steps of the Sky Tower on May 10, wearing about 27kg of firefighting clothing and breathing apparatus, to raise funds for the Leukaemia and Blood Foundation.

Mr Carvalho and his training partner, Dunedin firefighter Richard Yardley, face a few challenges along the way, including a gruelling training schedule and a thyroid condition that makes it difficult for Mr Carvalho to cool down when he gets hot.

Because of the latter issue, Mr Carvalho would climb in the ‘‘donned'' category, meaning he would wear the full fireman's uniform but not breathe from the tanks, Mr Yardley said.

The friends met two years ago at the Mosgiel pool, where Mr Carvalho trains most days, and began swimming together.

After a cheeky quip from Mr Carvalho that his friend was a ‘‘tired turkey'' when he did not complete the required laps one day, Mr Yardley challenged Mr Carvalho to the climb.

Since last October, they have trained at least once a day either swimming laps, aqua jogging, or running up the 176-step stairway in Otago House, Moray Pl, six times once a week, to simulate the Sky Tower climb.

From this week, the Otago House climb will increase to every second day.

Mr Carvalho, a gold and bronze medal winner in skiing at the 2005 Special Olympics World Winter Games in Japan, was confident he would reach the top of the Sky Tower.

He enjoyed sports, particularly swimming, playing golf and skiing in the winter - and he was better than Mr Yardley at all of them, he said.

Mr Yardley is the only Dunedin firefighter in the climb. Two teams of firefighters from Central Otago will also attempt the challenge.

Mr Yardley said he and Mr Carvalho's swimming coach Dianne Holleyman, were motivated to take up the challenge after they both lost close friends to leukaemia.

The pair will hold two public street appeals in Dunedin to raise funds for the Leukaemia and Blood Foundation later this month.