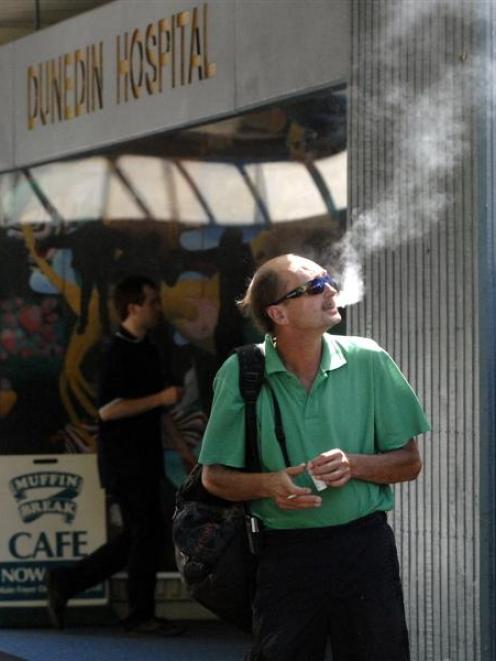 Dennis Leitch, of Alexandra, smokes outside Dunedin Hospital yesterday while he waits for a friend to finish a hospital appointment. Photo by Linda Robertson.
A recommendation to turn down a request to introduce a Dunedin City Council bylaw banning smoking on footpaths around Dunedin Hospital is disappointing, but not surprising, hospital managers say.

The request was made as a way for the board to stop people smoking outside the hospital's main entrance.

However, council environmental health team leader Ros MacGill said enforcing such a bylaw would be difficult, costly, and unlikely to reduce the number of smokers.

In a report to be considered by the council's planning and environment committee on Monday, Ms MacGill said while a bylaw might be a solution to the board's problem, it would create more problems for the council than it would solve.

Smokers were likely to move to another area and the bylaw could be unpopular with some members of the public, leading to high levels of non-compliance.

Enforcement issues could be extended if other residents asked for smoke-free designations.

The bylaw could be challenged and invalidated as unreasonable if it were inadequately enforced, she said.

Ms Blake said staff were looking at other solutions to the long-standing issue, such as providing a smokers room in the hospital and assessing its "no smoking" signs.

Installing a smokers room that would comply with legal regulations was estimated to cost up to $80,000 and the board would have to decide if it wanted to invest "our scarce capital funds" on such a solution.

There was a "no smoking" sign in the hospital entrance and the adequacy of this was being assessed.

The hospital was a smoke-free zone and staff had a duty to maintain that and approach people who were smoking in the entranceway, as opposed to on the footpath, and explain it was a smoke-free area.

"I have had to do it three times today," Ms Blake said.

However, the board did also understand smoking was an addiction and it had been training staff to ask patients if they smoked and offering them help to quit, using interventions such as nicotine replacement therapy.

Nationally, the Ministry of Health expects all hospitals to reach a target to provide 80% of hospital patients with advice and help to quit smoking by July.

Alexandra man Dennis Leitch, who was smoking outside Dunedin Hospital yesterday, said banning smoking on footpaths around the hospital would not encourage smokers to quit, but it would keep the main entrances cleaner as long as it was enforced.

After driving a friend to the hospital to undergo tests for cancer, he had thought about quitting and had bought nicotine patches, but had not yet started using them, Mr Leitch said.