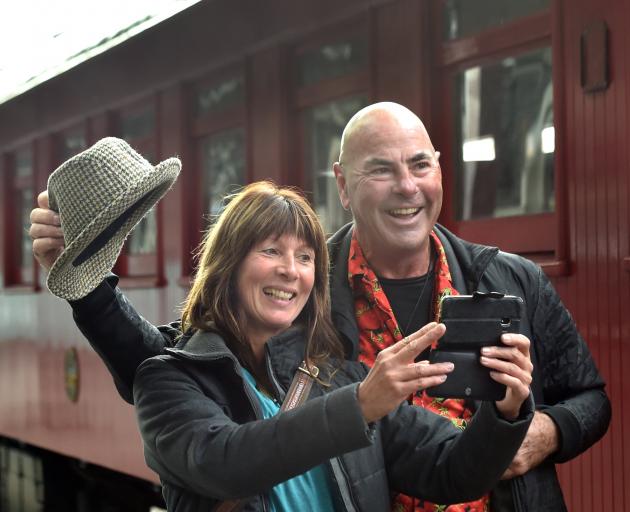 Taking in the sights of Dunedin before boarding a train for the next leg of the Great Southern Train Tour yesterday are Lizzie and Danny Carson, of Kaikoura. PHOTOS: STEPHEN JAQUIERY AND PETER MCINTOSH
"This is Kiwi, mate."

Those were the words of Lizzie and Danny Carson, of Kaikoura, who boarded a train, double-headed by two DA 1950s heritage locomotives, at Dunedin Railway Station yesterday for the next leg of the Great Southern Train Tour.

About 180 passengers had enjoyed a night at the Scenic Hotel Southern Cross and a visit to Larnach Castle, before chugging on to Invercargill at noon.

The Carsons, who have been married for 17 years, said it was their love of trains and want for a romantic trip away that led them to hop on board for the new two-week historic train tour of the South Island.

And they were happy they did.

Mr Carson said the trip has been "fantastic" and credited tour staff for that.

"Every trip is hopeless without good staff, and these guys are experts."

The people on board, a complimentary bar and the coastline between Oamaru and Dunedin were some of the highlights so far, he said.

"The train is winding through the bush all the way, and you’re seeing through to all the different bays and inlets, and amazing architectural houses.

"It was just beautiful."

Mrs Carson said they had particularly enjoyed talking to like-minded people and hearing stories from other passengers.

"We’re captured on board."

Trainspotters, who had been following the train all the way, had also provided some additional entertainment outside the train window.

It was like a scene from Goodbye Pork Pie, Mr Carson said.

"They’re steaming down these metal roads ... they have got to beat the train to the next level crossing."

Despite doing many train tours around the world, the couple were particularly impressed by the Great Southern Train Tour.

"It’s good to see your own backyard."