But as of yesterday, there were 20 pallets of them, sitting in the central courtyard at Dunedin's former prison building, just waiting to be laid.

Trust contractors cut the roof off the steel mesh cage in the courtyard so they could hoist the pallets of new roofing slates, from the street outside, over the south cell block, into the prison grounds.

Dunedin Prison Charitable Trust architectural conservator Guy Williams said breaking into the prison was nowhere near as difficult as it would have been to break out.

"Not when you've got a crane and an oxy-acetylene torch to cut through steel mesh. It's easy." 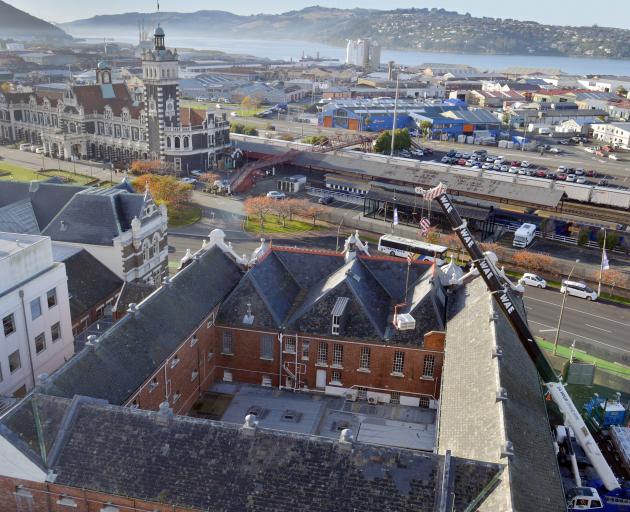 A large crane lifts one of 20 pallets of Spanish roofing slates into the central courtyard of Dunedin’s former prison building. PHOTO: GERARD O’BRIEN

Trust chairman Owen Graham said it was a "pretty intricate exercise" for the crane driver to lift the precious slates inside the prison walls, but it meant the trust could be assured its $60,000 investment would be safe and secure.

"These slates have been purchased by the trust and come from Spain via a United Kingdom roofing company.

"They are the start of our stage 2 project - to complete the re-roofing of the three remaining cell block roofs."

Stage 1 involved the re-roofing of the administration block in 2016.

He said the trust would now begin fundraising the estimated $450,000 needed to install the slates on the cell blocks.

It was hoped the re-roofing work would begin in September, 2020.