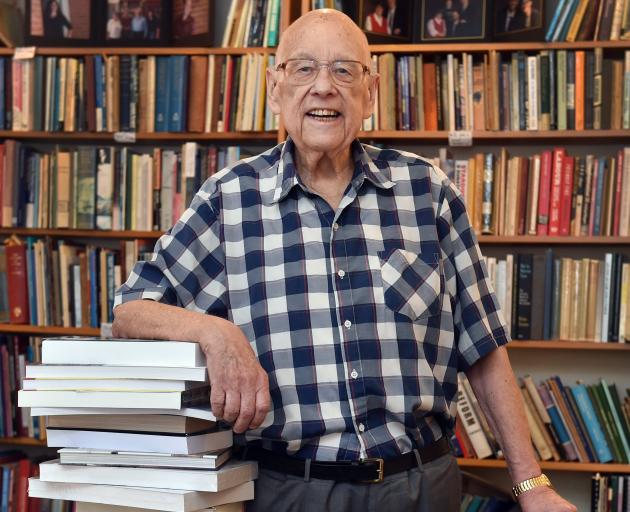 Stan Rodger, surrounded by books in his home office. PHOTO: PETER MCINTOSH
Obituary of Stanley Joseph Rodger, politician.
Stan Rodger, former Cabinet minister, was central to the Labour Party in Dunedin.Generations of local Labour MPs and aspiring candidates made their way to his door and benefitted from the wisdom and experience of a wily politician who was a pivotal figure in the Fourth Labour Government.

Mr Rodger, who died on May 29, also dispensed advice from afar, ringing and emailing an astonishing variety of contacts with suggestions or reflections gained from a lifetime in politics.

Stan Rodger was born in Dunedin on February 13, 1940, the son of Scottish child migrant James Rodger and his Dunedin-born wife Edith Rodger.
His parents, like many of their generation, became loyal Labour supporters due to having lived through the Great Depression: Mr Rodger said he was born a Labour man and through his childhood he hardly knew a National voter.

After receiving a solid grounding at Kaikorai Primary, Mr Rodger attended King Edward Technical from 1954-57, before becoming a clerical cadet at the Ministry of Works.

From his teens Mr Rodger aspired to be a member of Parliament, and in 1957 he took the first step of that journey when he joined the Wakari branch of the Labour Party and set out to help the campaign in the staunch National seat of Otago Central.

Despite his obvious ambition — from his 20s Mr Rodger’s aim was to become a Cabinet minister and from his 30s his life’s goal was to become minister of labour — and wholehearted commitment to the Labour cause, Mr Rodger was to serve a long apprenticeship before finally being named as a candidate in a winnable seat.

The brash 23-year-old’s age counted against him when he sought the Dunedin Central nomination for the 1963 election, but Labour was happy for Mr Rodger to cut his teeth as the sacrificial lamb back in unwinnable Otago Central.

His commendable performance in securing a 15% swing and cutting the National majority to 2675 helped get Mr Rodger another crack elsewhere in 1966, but Waitaki was equally as unlikely to be fertile territory for a Labour candidate: Mr Rodger again finished second.

Away from the hustings however, Mr Rodger was making much better progress.

In 1962 he was promoted and transferred to head office in Wellington, where he continued to rise through the ranks of the public service, first in the Ministry of Works and then the Housing Corporation. 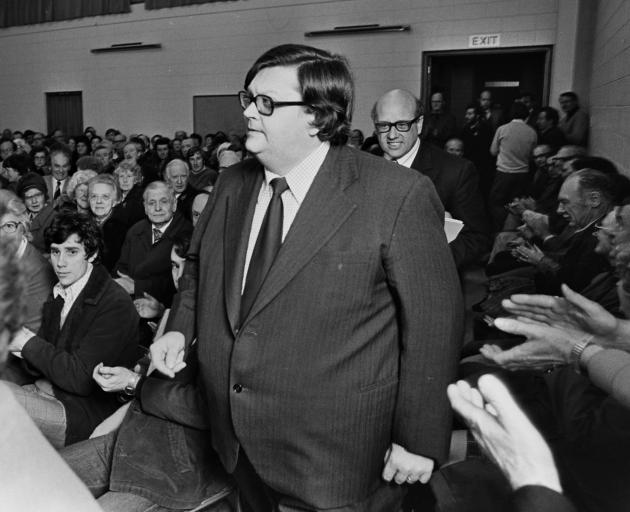 Future opposition leader David Lange and then Dunedin North candidate Stan Rodger walk in to address a 1978 election rally at Wakari Union Church. PHOTO: OTAGO DAILY TIMES FILES
As befitted a strong Labour man, Mr Rodger also became a staunch unionist, and it was through his involvement with the Wellington branch of the Public Service Association that he met "the formidable Miss O’Connor" — who became Mrs Anne Rodger when the couple married  in Wellington on October 19, 1968.

Mr Rodger continued his ascent in the PSA, making the executive committee, becoming the vice-president in 1965 and president in 1970.

Despite being Wellington-based — and having stood unsuccessfully for the Wellington Hospital Board and Wellington City Council — Mr Rodger still had a close eye on Otago politics and in 1975 he, again unsuccessfully, threw his hat in the ring for the Dunedin North seat.

A party elder prophetically told a disheartened Mr Rodger "We’re going to lose this seat. Come back and win it in three years," and that was exactly what happened, Richard Walls winning the seat as part of a National landslide.

In 1978 the Rodgers returned to Dunedin, Stan having secured the Dunedin North nomination, and embarked upon a hard-fought campaign during which he had to defend his credentials as a local, organising an Evening Star photo shoot of Gillian at the gates of his own  former school, Kaikorai Primary.

Both men, and many other Labour MPs in subsequent years, benefitted from Mr Rodger’s considered and considerate advice. The foundation for his first and future wins was meticulous planning: Mr Rodger maintained an extensive mailing list and kept up a regular series of meetings with local notables to ensure he had early warning of any issues in the electorate.

It was a level of preparation and organisation Mr Rodger had developed in his days of negotiating pay awards and it was a lifelong habit: prior to his death he organised his funeral service, commissioned a 100-page biography from former press secretary Debbie Hannan to be distributed at his service, and summoned this reporter for a background interview to help preparations for his obituary.

Constituency work appealed to Mr Rodger, who quickly ensured that he attended every school fair in the seat every year, a policy followed by Mr Hodgson and now by Dunedin MP David Clark.

His managerial skills were soon utilised by Labour, which made him junior whip in 1980 and shadow postmaster-general in 1982. Labour had come very close to winning the 1981 election and as the 1984 poll approached, with Mr Lange now at the party’s helm, Mr Rodger’s time had come.

A comfortable win was followed by the newly-elected prime minister offering Mr Rodger his coveted role of Minister of Labour — one which he only accepted so long as he could have the State Services portfolio as well.

Although the economic reforms engineered by Finance Minister Roger Douglas are the enduring memory of that government, Mr Rodger also embarked on his own far-reaching rehabilitation: nothing less than a wholesale reimagining of New Zealand’s industrial relations system.

Although Mr Lange allowed Mr Rodger to follow his own agenda, which was to take the slow road to reform the private sector and the fast track to reform the public sector, that agenda was one which ran counter to the government’s economic direction.

Mr Rodger negotiated the end of what had been a three-year-long wage freeze imposed by former prime minister Rob Muldoon before he embarked on drafting and passing the Labour Relations Act (1987) and the State Sector Act (1988).

Both were opposed variously by the Business Round Table, chambers of commerce, Treasury, unions and Labour’s three finance ministers, but having been schooled in the "knockdown, drag out" world of union politics, Mr Rodger knew how to fight his corner.

"I worked like a beaver to keep the zealots out of the labour market," he said.

"The Round Table put a lot of effort in to getting me dislodged from the labour portfolio."

The unions were not best pleased either: the PSA stripped its former president of his life membership, only restoring it in 2004.

It helped that Mr Lange had his back: Mr Rodger’s biography includes a note from the prime minister appointing him to Cabinet after the 1987 election which closed: "This substantial workload will be a severe provocation to the Business Round Table."

Despite those pressures, and the wider political turbulence created by what was soon dubbed "Rogernomics",  Mr Rodger held firm to his principles and became a trusted pair of hands — having taken on Immigration in 1987, and after Mr Lange sacked Richard Prebble as State Owned Enterprises minister late the following year it was Mr Rodger who assumed that burden.

As New Zealand went through a time of extensive and bitterly contentious reform, Mr Rodger was often called upon to intervene in strikes and industrial disputes, invitations he invariably declined.

"That was part of my agenda, that the minister of labour shouldn’t intervene in industrial disputes: if you have robust machinery in place, you leave it to the parties."

Mr Rodger’s second term as a Cabinet minister was more fraught than the first, as internal ructions destroyed the government.

After which, with dry understatement, Mr Rodger called "a lot of punch-ups", Mr Lange was replaced by Geoffrey Palmer, who then made way for Mike Moore.

Long before then however Mr Rodger had decided to call it quits.

Knowing full well that people would suspect he was pushed rather than jumped, Mr Rodger took the unusual step in February 1988 of handing then Otago Daily Times editor Keith Eunson a sealed envelope to be opened in December that year, which contained a letter which set out that he was going to step down in 1990.

Mr Rodger told Mr Lange of his plans in August 1988 — Mrs Rodger was not told until July the following year and the general public only found out that December.

Before he departed Cabinet however, Mr Rodger gifted Dunedin a legacy few know his hand was behind.

As a former King Edward Tech pupil he had kept a close eye on his former school as it evolved to become Otago Polytechnic, and in one of his final acts as a minister helped secure the funding for that institution and the College of Education to relocate to Forth St, creating the tertiary education precinct now integral to that part of the city.

In early 1990 Mr Rodger missed out on election to Cabinet and served his final months as an MP on the backbench, although he was frequently sounded out for advice by ministers.

Mr Rodger never regretted leaving Parliament, although returning home to Dunedin without a job to go to was somewhat stressful.

Having prudently paid off their mortgage from his ministerial salary, Mr Rodger could afford to wait and work did indeed come, and plenty of it.

The recently appointed Companion of the Order of St Michael and St George for public service filled various roles in the School of  Medicine at the University of Otago, before being named chairman of the Southern Regional Health Authority in 1995.

As the 1990s gave way to the 2000s Mr Rodger was appointed to a range of governance roles by both National and Labour governments, including being Transpower chairman, an NZ Post board member, and  part of a review of parliamentary salaries and allowances.

"Retirement" did not slow Mr Rodger down as he served as a board member or patron for many local organisations, including Age Concern, the Globe Theatre, Dunedin Railways and the Third Age Trust.

And there was always politics: Mr Rodger kept his finger firmly on the pulse and talked regularly with past and present MPs and other political figures of the day, offering advice or responding with suggestions when asked — which was often.

"I’m a political animal," was how Mr Rodger summed himself up.

"I think about political matters every day, and have done so for 60-70 years."