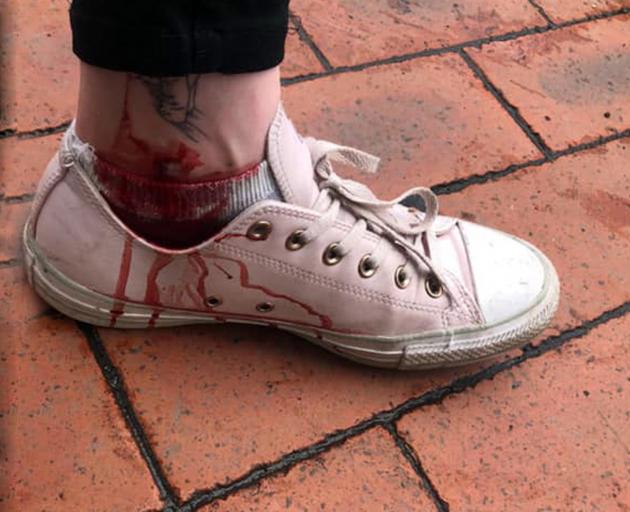 Jo Wilson's bloodied ankle after a Lime scooter mishap. Photo: Supplied
A steady stream of Lime scooter-related casualties have made their way to Dunedin Hospital's emergency department since the electric vehicles made their debut in the city last week.

''We have not collated actual numbers, but anecdotally, we are seeing around five to seven presentations per day in the emergency department directly attributable to Lime scooters,'' Southern District Health Board nursing medicine director Jenny Hanson said.

''These have mostly been a mix of minor to moderate injuries to hands, feet and heads.''

At this stage there had been no serious injuries, Ms Hanson said.

Student Health had yet to treat any scooter injuries.

ACC had received four scooter-related claims in the first four days since Lime launched, but could not specify if they were Lime-related or injuries sustained on other scooters.

Dunedin Urgent Doctors and Accident Centre has had two scooter wounds to deal with, including Jo Wilson.

Ms Wilson was riding a scooter up hill, and when it slowed down she put her foot on the ground to push it like a normal scooter.

Rather than speed up she came to a sudden and painful halt as the scooter's stand hit her ankle and ripped her flesh.

''I felt it but didn't really take much notice until we got to the lights and I looked down and saw this huge pool of blood,'' she said.

''I went to the supermarket, got some plasters and cleaned myself up, but then it got really sore with sharp pain, so I went to the urgent doctors where they cleaned it up properly and told me I had done some nerve damage.''

Despite Ms Wilson's injury - which meant time off work for a few days - she remained a fan of the scooters.

''I'm still quite sore and limping a lot and it's still quite painful, but thankfully it's not worse.

''I'll do it again. It's a lot of fun, but I won't be putting my foot down on the ground like that again.''

Add a tax to pay for ACC and costs_ I am amazed these scooters can just appear and clutter footpaths as well as endanger pedestrians and we were never asked. Still to see the Council on them?

Are you part of the Dunedin Anti-progression Brigade?