Stock worth more than $1m destroyed in fire 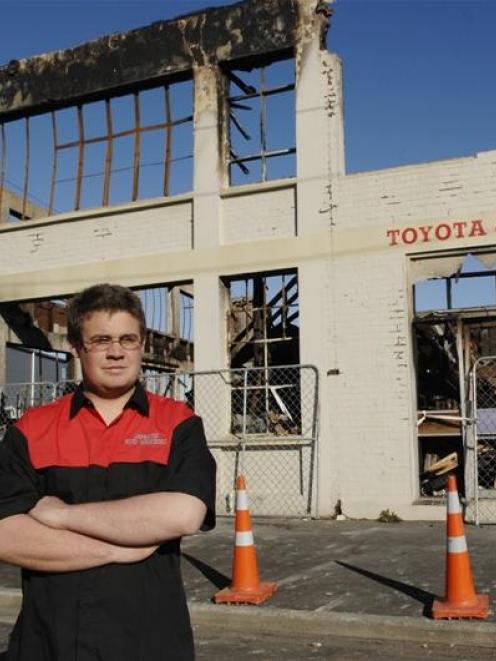 Japanese Auto Wreckers director and manager Ricky Cockburn said he had worked hard since buying into the Birch St business two years ago and giving up was not an option.

The 24-year-old said since leaving school aged 17, he had worked in the spare parts trade to raise the deposit for a mortgage to buy into the business.

"I decided I wanted to get ahead in life. I was into racing and decided that cars was my future."

To see it all go up in smoke was "devastating", he said.

"The place is unrecognisable. It's heart-breaking.

"It's like my second home, really. All the hours I've put into this business have all gone to waste. It's my life."

The business was insured.

Mr Cockburn said hundreds of thousands of dollars worth of spare parts were stored in the building, along with 80 cars waiting to be dismantled, none of which could be salvaged.

He was especially "gutted" because his "pride and joy", a Mitsubishi Evolution III rally car, was also destroyed.

He had spent the past three years building it from spare parts and had only got to race it twice.

His daughter's first birthday present - an electric car in which she could ride - was also destroyed.

"It was for her birthday in a couple of weeks' time.

It was sitting under my desk."

Mr Cockburn said he would do everything in his power to keep the six employees, but he could not guarantee their job security.

During the next couple of weeks, he would try to keep the business "ticking over" by storing car parts in a different place until new premises could be found.

He hoped business would be back to normal within the next two months.

"This is just a bump in the road. We're not going to fall over."

In the meantime, Mr Cockburn hoped Dunedin police would catch the culprit.

Police say they have no leads on the suspicious fire yet, or the one at Independent Tyre Specialists in King Edward St early on Saturday.

Both were believed to have been lit by the same person.

Search for missing teen suspended for the day