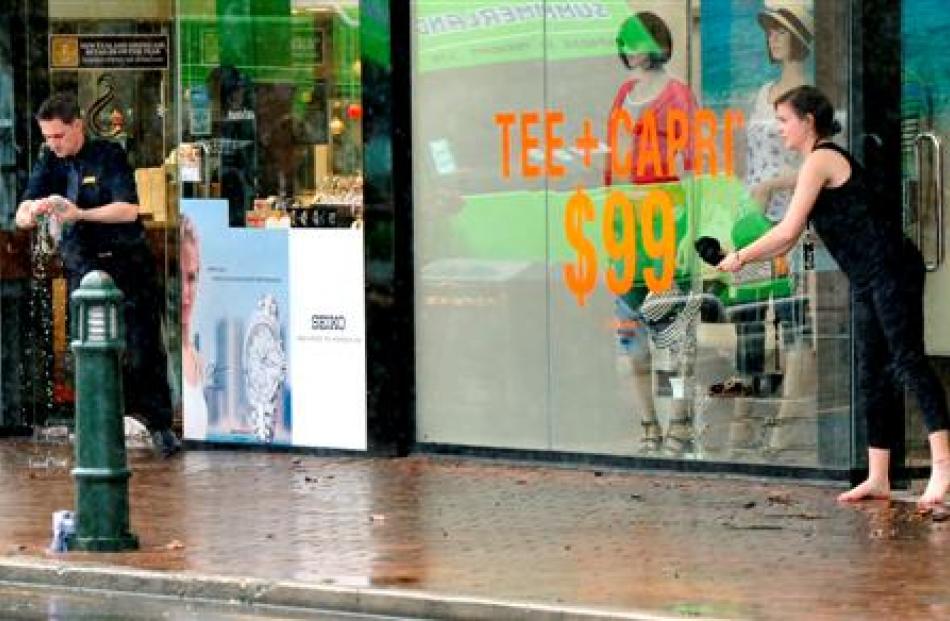 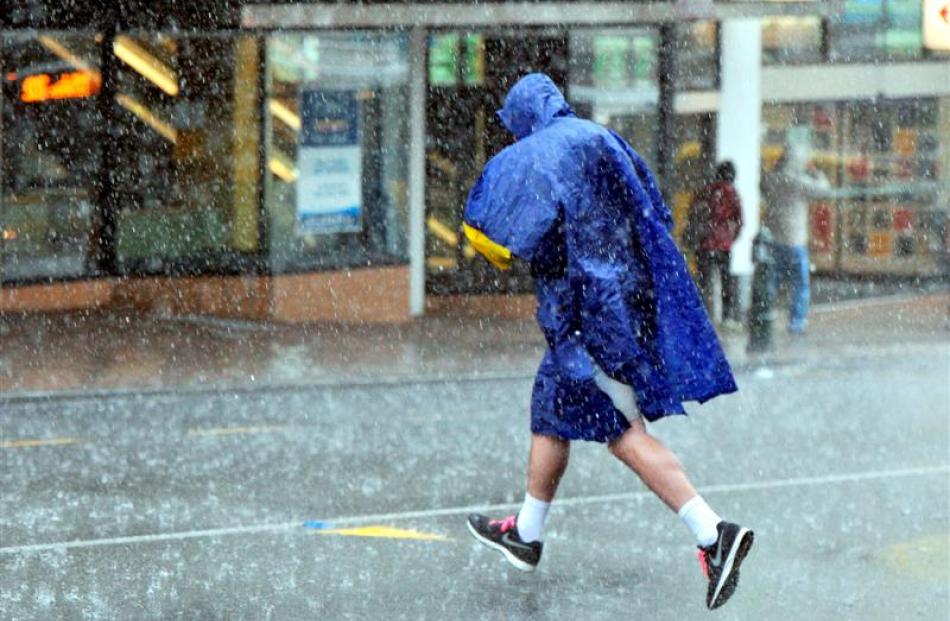 A pedestrian runs across George St in the rain. 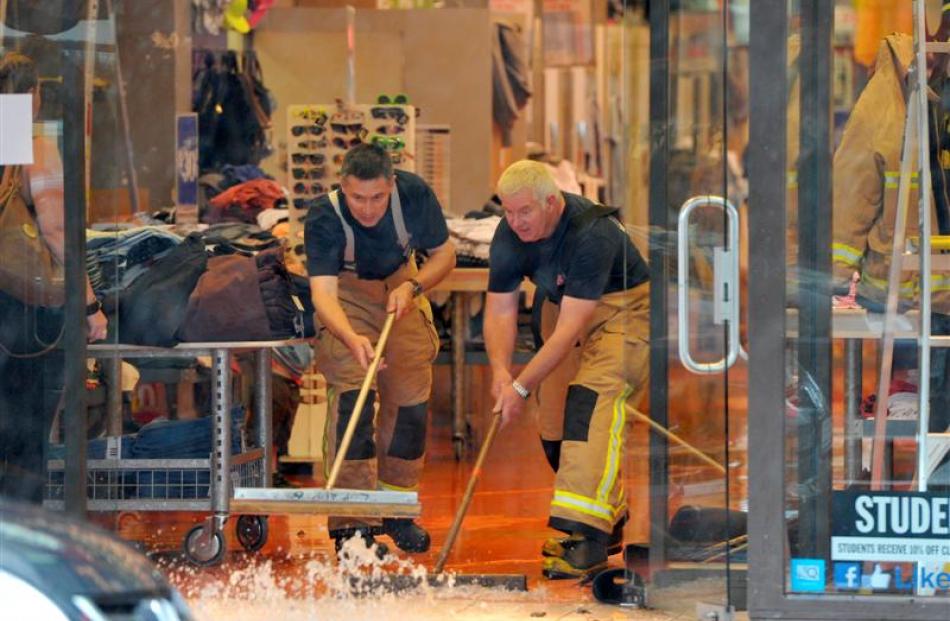 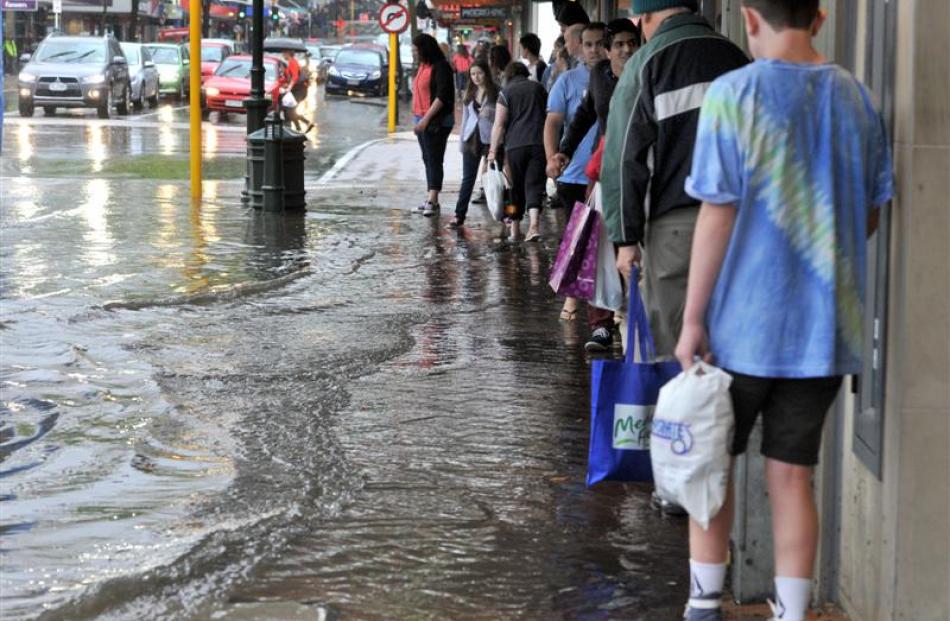 Shoppers try to avoid getting their feet wet as rain water washes on to the footpath in George St near the Wall Street mall and St Andrew St yesterday. 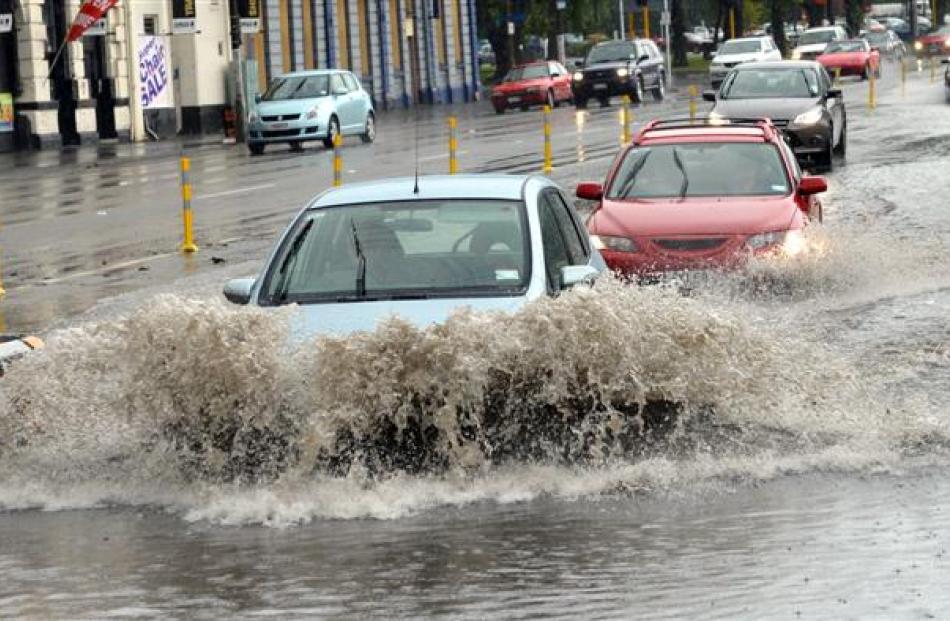 Parts of Dunedin were flooded late yesterday afternoon when a thunderstorm struck, causing havoc for some central-city businesses.

In less than 30 minutes, 15mm of rain fell in the central city, with 18.8mm falling between 4pm and 5pm. Water washed into about 20 businesses, mostly in George St between the Wall Street mall and the St Andrew St intersection.

It also provided a surprise for one Musselburgh resident, who was sweeping pooled water off his driveway when he encountered a 1m eel slithering around on the footpath.

''It gave me a hell of a fright ... I swept it into the gutter and it found its way through the grating of the drain,'' Bruce Beath said.

MetService confirmed the storm formed west of the city and then crossed over it and Otago Peninsula before moving north.

Alibi Bar, on the corner of Princes St and the lower Octagon, was flooded when water from a manhole in the footpath entered the premises.

Staff were not surprised, a staff member, who declined to be named, said.

''It's not the first time it's happened. We're pretty used to it.''

In George St, dirt and water lay in the worst-affected store, Jay Jays Ltd, and the Fire Service was called to pump water out.

Staff declined to speak to the Otago Daily Times.

Staff at neighbouring stores said it was not the first time they had been affected.

Staff at Daniels Gemtime Jewellers and Max Fashions said the water had risen up the kerbs and passing traffic, particularly buses, had forced it on to the footpaths and into stores.

Staff from all stores along that section of the street could be seen mopping out their stores.

Max assistant manager Anna Wilson said it happened quickly and there was little they could do to stop it.

''We saw it rising on the other side and I said to the girls, 'Go and get towels', but by the time they got back, it was in here.''

Enviro Clean and Restoration was called to help dry six Wall Street premises, including a children's wear shop, a shoe shop, a music shop, the mall manager's office and a large pharmacy.

Cafe LOL owner Paul Martin, whose premises experienced only minor problems, believed more regular removal of leaves from nearby street drains could help them cope better with such downpours.

Dunedin City Council roading engineer Peter Standring said the flooding was the result of the intensity of the rain over a short period.

It was not feasible to build a pipe network able to cover just a few extreme weather events a year, he said.

The council would investigate problems at the corner of St Andrew and George Sts.

''It has highlighted some areas that need a closer look.''

Contractors were clearing leaves and drains throughout the city and monitoring slumping on Otago Peninsula roads.