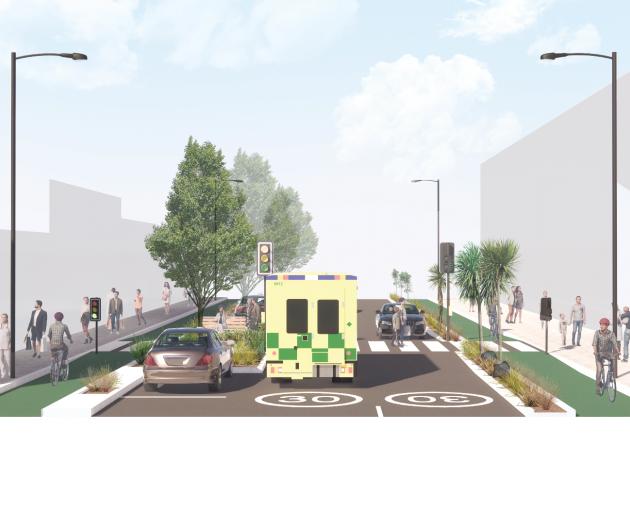 The proposal includes making Cumberland St one-way state highway into a two-way 30kmh local road with cycle lanes. Photo: NZTA
Consultants have been paid $150,000 to study how an overhaul of Dunedin’s city-centre streets could affect traffic.

The first feedback round and the public’s first look at the proposed changes by a multi-agency group, including the NZ Transport Agency and Dunedin City and Otago Regional Councils, closed yesterday — without the project consultants’ work being made public.

It could be October before the public sees the information now held by the multi-agency group.

The group received the consultants’ report in June.

Earlier this week, the New Zealand Automobile Association called for the report to be made public.

The association said the public had been asked to give feedback on options "based on streetscape images, without any information" on the implications for traffic.

As preparations are made to build a new hospital in the city centre, proposals for the changes to Dunedin streets include scrapping the one-way state highway system through the city centre and creating "more options for car-free travel" in a project expected to cost at least $100million.

Joint client lead and city council transport strategy manager Nick Sargent said the work done by project consultant Stantec would be used in future but the group was at the "ideas stage".

"The work is ongoing and is part of a suite of information the project team is gathering to help inform the business case process," Mr Sargent said.

"Other information includes the outcome of the current public engagement and other technical studies.

"It is important to remember that this is a first step in the feedback process to build the business case for the change that inevitably follows a major building, the size of the new hospital with its particular requirements for access, being built on a busy highway artery."

A week before the consultation round ended, Mr Sargent confirmed the project group would not release the city-centre traffic-modelling information until it had been reviewed, despite the group confirming it had received the information in June.

At the time, he said only one-third of about 300 respondents were in favour of doing away with the one-way system.

This week, Mr Sargent said the feedback received over the past month "highlighted the importance of the traffic-modelling information being available as part of the next stages of public engagement".

The AA wrote a four-page submission, which it also released as a media statement this week, saying getting rid of the one-way roads could make traffic "substantially worse" in the city and criticised the "poor process" used in the public engagement.

An NZTA spokesman said more than 700 people had completed the online survey and more than 440 comments had been made online and the group expected to share more information on the project in October.

More information on the feedback it had received over the past month was expected to be released next week.

"The association said the public had been asked to give feedback on options "based on streetscape images"....NZAA.

And let's not forget just how misleading these images are!...The one above (in this article) is a DCC depiction of their plan for the current one way north bound system. It shows 2 cyclists, 17 pedestrians, one parked car, and a ONLY two cars in motion. It's a wonder they didn't place a few rabbits grazing the grasses, and a lovely stream flowing down the road with children frolicking in it!..........Now, take an 'honest' look at this road at any time of the day or week, and you'll see: 1-2 pedestrians, no cyclists, and 30-40 cars, bumper to bumper....Truly, this council live in a fantasy land.

And this is the crowd that have given us chaotic and unused cycle paths, now removed 'parklets' in the main street, destroyed parking spaces, increase parking charges all in the hope of forcing us to use polluting, slow and empty buses? How about firing them, and reducing our rates? We would be better off if the DCC actually listened to its ratepayers, then the above debacles would not happen and we would be better of by the millions of $$.

Seriously what a waste of coin I suspect that key staff of the DCC advised what the outcome had to be and it was tailored to meet this, the survey options of which was the best solution was pathetic and the survey of the options left no room for other suggestions. Hawkins and others Covertly changing Dunedin they need to go because they are stone walling Dunedin's people

Public Consultation is a joke! What it should be called is Public Marketing! Don't be fooled into believing that it is the public who is deciding the fate of transport in the city centre. 0h no! This process is all about convincing the public that predetermined decisions are in the best interests of the public.

You may as well divert all heavy vehicles down Princes & George Streets now and see what happens ... if it had been done earlier, the consultants wouldn't have been required saving $150k of ratepayers money !!

And I really do have to say it, if it's the same consultants and / or "project team" making the decisions, we already know the outcome from their previous roading changes .... utter chaos !!

All you have to do is look at the "artists impression" and instead of 1 parked car, 2 cyclists, and 2 moving vehiles ... one being an ambulance with a critically injured patient trying to get to the hospital, it doesn't represent anything even remotely like a State Highway at rush hour. On SH1 at 7.30am, there's two lanes of traffic heading south, at a standstill from the Oval to Lookout Point ... close one lane for a few days and see what reaction you get from the general public, because this is just farsical ... something that would have been better on the front page of the ODT on the 1st of April !

I'm guessing it will be filed in the "idiotic ideas" draw and another $150k spent on an even worse one ...

The new hospital location is the problem. Having it between two lanes of a state highway was a very bad idea to start off with. The DCC have put themselves into a position where they have to make changes to the one way system to make it safe for students, patients, staff and visitors to the hospital. There must be a better place for the new hospital.

Gee this council knows how to spend other peoples money- straight out of the socialists handbook. Sadly the transport department management are incompentent and one must think its time to let mr sargent go, he lacked the expertise prior to starting in dunedin and is now destroying our transport network.

I've got an idea, instead of constantly bad mouthing the council and it's spending (not saying it's not warranted...), how about actually offering suggestions as to where traffic could go, where a SH1 bypass could go, etc etc. Traffic is only going to get worse and ignoring the fact that the hospital is getting built, traffic is already a problem and will have gotten worse anyway.

So, what are the options???

Noddy,Mr Plod and Big Ear's could do a better job of running the city.