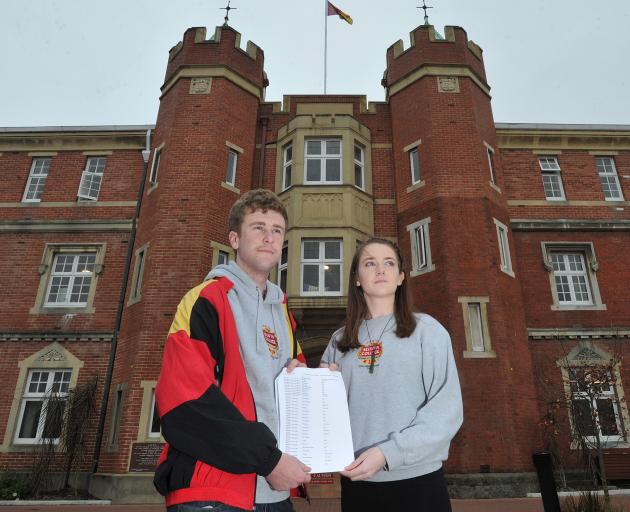 Selwyn College students association president Jimmy Anderson and former resident Sophie Cawood are against a plan by the Anglican Church to sell Selwyn College. PHOTO: GREGOR RICHARDSON
The Selwyn College board and many of its former and current students appear implacably opposed to its sale.

Plans to end 125 years of Anglican ownership have soured relationships in the church.

There is anger over college board chairman Rev Aaron Douglas' decision to put forward a motion allowing the sale at a synod meeting, despite his board being against the idea.

Board member and prominent Dunedin lawyer Anne Stevens was yesterday "disappointed" with the decision, and said the matter was not over yet.

Since news of the possible sale became public, 280 Selwyn residents and former residents had signed a petition presented to the synod calling for church involvement to continue.

The church voted last month at the synod meeting to allow the sale of the buildings and business, continuing a trend for residential colleges to move from church control to that of the University of Otago.

It said the college that helped produce the likes of All Black David Kirk, Health Minister David Clark and former prime minister Sir William English had become difficult for the church to manage.

But the Otago Daily Times has been told that was not the view of the college board, which was upset Mr Douglas supported the sale at the synod.

Mr Douglas responded his position at the synod was not as chairman of the board, but as a clergy member of the synod.

He said the board did make it clear it was not in favour of the idea, but his motion had nothing to do with the board's position.

Mrs Stevens said despite her disappointment, "I don't see it as a closed chapter yet".

"There is a lot of water to go under the bridge before a sale could, if it ever did, take place.

"My view is it's very important there be independent colleges."

Former resident and Dunedin North Parish synod representative Sophie Cawood organised a petition that acted as testimony at the synod from Selwyn College students from 2016 to 2018.

The petition affirmed the relationship between the college and the Anglican Church as being fundamental to the special character of the college.

It attracted about 280 signatures and 50 comments from students, most containing a plea not to sell the college, despite being circulated for only three days.

"A lot of what we find special about the college and the special character of it is very fundamentally linked with its independence from the university," Ms Cawood said.

She said the only positive raised at the synod for selling was the money the sale would raise.

"That was really disheartening, to think the church would turn its back on all of us for some quick cash.

She would continue to oppose the sale, and knew of many letters being sent to the Diocesan Council.

"I honestly believe it's the best place to be a young person in the whole world.

But Mr Anderson said the church process was confusing.

Residents opposed the sale, and he would continue to do so.

The resolution at the synod would allow the sale at the direction of the Diocesan Council.

Dunedin Bishop the Rt Rev Dr Steven Benford, who is on the council, said he had been contacted about what happened at the synod.

Feedback would be discussed at a council meeting next week.

"Part of what we will need to do is listen to feedback, seek appropriate advice and decide on a plan of how we can explore this further."