Student 'critical' after jump off roof 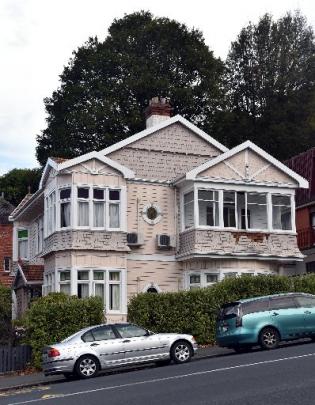 Police were called to the Pitt St flat at least twice due to noise. Photo: Peter McIntosh

A student is fighting for his life after jumping off the roof of a two-storey house at a large Dunedin flat party last night.

Senior Sergeant Brian Benn, of Dunedin, said the 21-year-old was seriously injured after "an aerial stunt'' at the Pitt St party went wrong.

Police were called to the flat about 11.30pm after the man jumped from the roof but failed to land safely.

"You could say alcohol was a factor,'' Snr Sgt Benn said.

St John ambulance spokesman Andy Gray said by the time the student reached Dunedin Hospital, his condition had deteriorated to "critical'' and he was suffering life-threatening injuries.

Snr Sgt Benn said police were initially called by ambulance to help navigate the drunken partygoers, but the party resumed and they returned to the residence a couple of hours later to deal with a noise complaint.

Police would visit the house again today to get further details of what happened.

An excessive noise notice, which allows officers to seize equipment if the property exceeds noise limits again with 72 hours, was issued at 11.20pm.

The second time officers were called at 11.55pm they arrived to find people spilling on to the street, but there was no music coming from the house.

Noise control officers, who arrived with police, were called to the property again at 1.17am and seized a stereo.

Residents of the flat declined to talk this morning.

Empty red cups were littered around the flat and there was broken glass on the footpath.