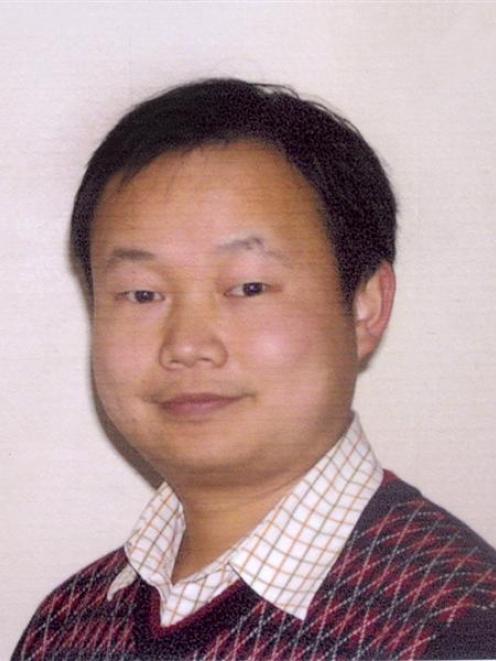 Li Hong He.
The cyclist run over by a stock truck outside Dunedin Hospital on Monday was a senior lecturer at the University of Otago's Faculty of Dentistry, a husband and father of two preschoolers.

Dr Li Hong "Chris" He (34) was appointed senior lecturer at the University of Otago in 2008.

"She was very distraught."

Her mother, who came to New Zealand for the birth of the baby, was still in Dunedin, he said.

Dr He was a valued member of staff and popular with students.

Before leaving China for New Zealand, he gained his PhD in Sydney in biomaterials, Prof Seymour said.

Biomaterials was the science behind the materials used in dentistry, like the metals, plastics and resins used to fill and replace teeth or dentures.

The bright young man had the potential to contribute significantly to dentistry in New Zealand, he said.

Otago University senior teaching fellow John Arts said Dr He was one of the nicest people he knew and had recently returned from maternity leave and had just bought a house.

"It was all just starting. He was well established at the dental school, had a new baby and a new house, so it's very sad because he had everything ahead of him."

"He was always really proud to talk about his daughter. I've never seen him angry in any way. He was always helpful and keen to help out. Even in times when dentistry seemed impossible, he'd be there to motivate you and make you feel better."

Students had created a Facebook page called RIP Chris (Li Hong) He and had set up a bank account for donations to his family, he said.

Students had donated $700 by yesterday afternoon, he said.

On the Otago Daily Times website readers said there was a need for greater separation of cyclists and vehicles on Dunedin roads.

"They are just one factor you have to consider. Driver behaviour is another factor. If a cycle lane is next to parked cars, then drivers need to be aware if they open the door, they need to be checking for cyclists."

Council senior traffic engineer Ron Minnema said the official line in the council parking strategy would be incorporated into the transport strategy due for consultation next year.

"In order to encourage more cycling in the city, provisions of cycle lanes should take precedence over on-street parking on routes where there is a conflict," the official line said.

Ms Connolly said any public feedback on road design of state highways would be passed on to NZTA.

Senior Sergeant Steve Aitken, of Dunedin, said the examination by Environmental Science and Research yesterday included an inspection of a car, stock truck and bike. Police were still investigating if the door of a parked car had been a factor in the accident.