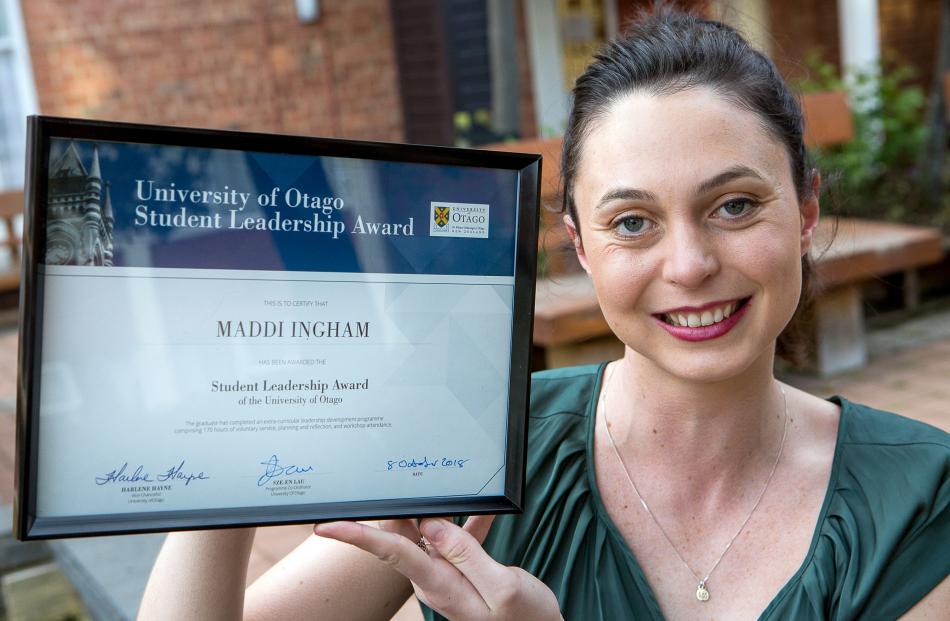 Accounting and law graduand Maddi Ingham, pictured last year. PHOTO: SUPPLIED
Former commerce and law student Maddi Ingham has flown back from her new job in Sydney to graduate from the University of Otago today.

"It's exciting, it's a nice chance to see everyone again," Miss Ingham said yesterday.

"It's definitely going to be my last time in Dunedin for a while, which is a bit sad, but it's exciting. It's a new chapter."

Miss Ingham (23) will graduate with a BCom LLB in a ceremony at the Dunedin Town Hall today.

She recently took up a job as an associate at Boston Consulting Group, a big international management consulting firm.

"I couldn't have got the job I've got without my degrees."

Otago University was a "great university", which had given her a strong start in her career.

The group of 100 predominantly law students held charity auctions, bake sales and other fundraisers to contribute towards the running costs of the refuge, raising more than $100,000 over the previous four years.

"It had a huge impact on my life," she said.

Her fundraising involvement had deepened her understanding of the extent and nature of domestic violence in this country.

It had also made her much more aware of the problems not-for-profit organisations faced in having to constantly think about raising money to support crucial community work.

"It's definitely the most important thing I've done in my life in terms of making a difference.

"It was definitely a very valuable, rewarding, worthwhile and stressful experience.

"The work they do is essential."

Their service was "well used and completely under-resourced", she said.

"You only become aware of the extent of the issue when you become involved."

She had also gained invaluable leadership and management skills through her work on the appeals committee, she said.

Late last year she was one of 21 Otago University students to gain University of Otago Student Leadership Awards, and she said that "with a dedicated leader, and a dedicated team, anything can be achieved".