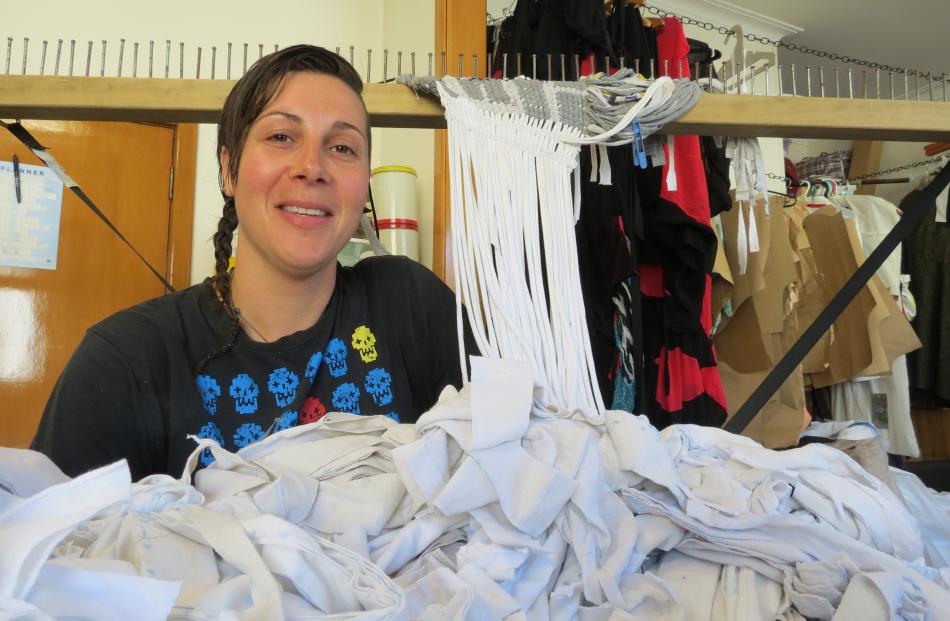 Dunedin fashion designer Fiona Clements examines T-shirt strips she will weave into a korowai to be draped around the shoulders of the Robbie Burns statue in the Octagon. Photo by Jonathan Chilton-Towle

The Robbie Burns statue in the Octagon looks set to get a flash new cloak thanks to a Dunedin fashion designer.

Senorita AweSUMO label owner Fiona Clements is weaving her own take on a korowai (cloak) made from old T-shirts for the statue to draw attention to textile waste in the fashion industry.

The korowai, which will be about 3.5m wide and 2m long, will be draped around the bard's shoulders on Fashion Revolution Day on April 24 during iD Dunedin Fashion Week.

Ms Clements is looking for T-shirts to cut into strips to weave into the korowai.

She mainly wants white T-shirts but also plans to use other colours such as black, red, yellow, blue, purple, and green.

So far, she has cut up about 60 T-shirts and estimates she will need to make 6km of stripping to go into the korowai.

She hoped to organise a few working bees via Facebook where members of the public could drop off T-shirts and volunteer their time to help cut strips, she said.

She had long wanted to make a large textile design to be displayed publicly, Ms Clements said. She had developed an interest in korowai after attending workshops run by weaver Robin Hill.

She hoped the korowai would trigger conversation about fashion industry sustainability and inspire the public to ask all designers associated with the fashion week to be transparent about how their clothes were made.

Ms Clements' textile installation will also mark the anniversary of the Rana Plaza disaster in Bangladesh, when 1133 people were killed and more than 2500 injured during a factory collapse on April 24, 2013.