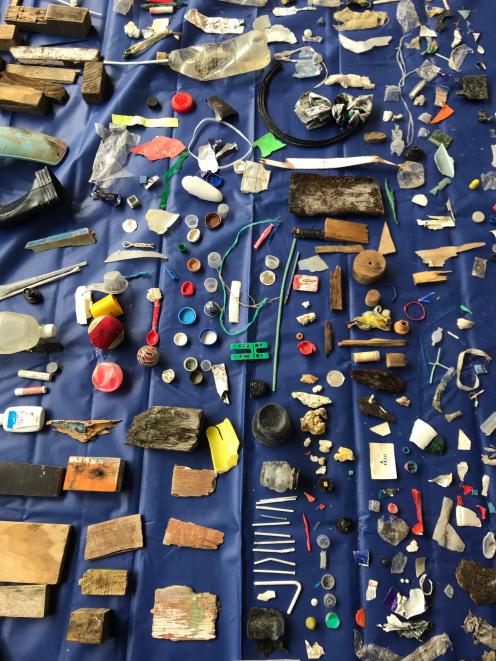 Litter found at Pilots Beach, in Dunedin. PHOTO: JANICE HUANG
The amount of rubbish blue penguins have to wade through nightly on Pilots Beach has been detailed in a national report on New Zealand's marine environments.

The Ministry for the Environment yesterday released its second marine report, which shows the impact of human activity on marine ecosystems.

It gathered data of litter from beaches around the country, including Pilots Beach on Otago Peninsula, the site of Dunedin's main blue penguin colony.

The report shows a concentration of 15 items of rubbish for every 100sqm of beach, of which 23% is hard plastics and 23% food wrappers.

"We see penguins getting entangled in plastics and lots of other rubbish where the penguins are trying to move up to where their nests are," Otago Peninsula Trust ecotourism manager Hoani Langsbury said.

The beach's position on the peninsula meant much of the litter entering the harbour ended up there, he said.

"If we didn't have the society we did throwing their rubbish around, we wouldn't have a problem."

Included in the rubbish were rugby balls, parts of vehicles and old tyres, he said.

However, it usually needed cleaning again the following day.

"It's also not good for the city or our iconic status when we've got 90 people a night coming down to watch the penguins come in and they're looking at them coming through hoards of plastic and other rubbish all over the beach."

Parking tickets survived a long time because of their plastic coating.

The report also shows habitats created by plants and animals are declining.

Eighty percent of shorebirds, 90% of seabirds and 22% of marine mammals were identified as being at risk of, or threatened with, extinction.

By-catch of seabirds, sea lions, fur seals and Maui and Hector's dolphins, was down on previous years, but still put "serious pressure" on some populations.

The report also confirmed New Zealand's sea temperature had risen and was consistent with the global average.

The country's sea levels were rising faster than before.

"The pH of waters around New Zealand will decrease by 0.3 to 0.4 pH units by the end of this century ... Reversing this profound change will take tens of thousands of years."