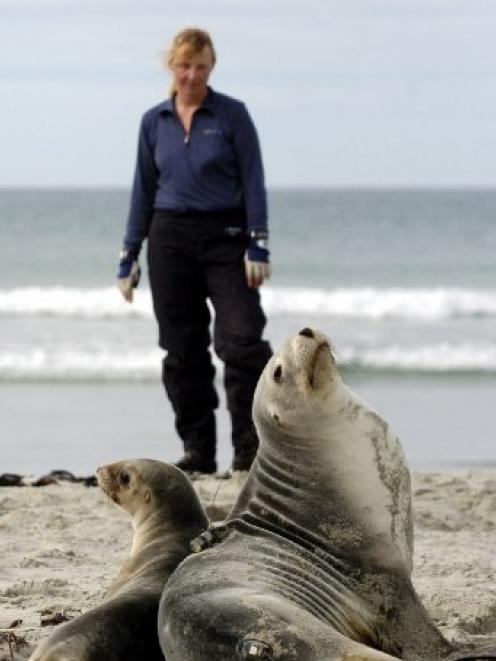 Dr Louise Chilvers, a Department of Conservation marine mammal scientific officer, pauses after helping attach a satellite-tracking device (visible on back) and VHF equipment (near hind flippers) to a sea lion named Aurora. Photo by Gerard O'Brien.
New Zealand sea lions breeding on Otago Peninsula have been fitted with satellite-monitoring equipment in a bid to learn more about their secret life, including their mysterious offshore foraging trips.

This is the first time scientists have undertaken satellite monitoring of sea lions based on the New Zealand mainland.

And this week, for the first time, the animals have also been fitted with time-depth recorders, which provide information on the duration and depth of their underwater forays.

Four of the nine female sea lions of breeding age which live on the peninsula, were temporarily fitted with the lightweight, miniaturised equipment, at the start of a Department of Conservation study expected to run for up to three years.

All the tagged Otago sea lions are descendants of Mum, a sea lion matriarch whose first pup, Katya, became, in early 1994, also the first sea lion pup produced on the mainland since the early 1800s.

Fitted with monitoring gear this week were Katya (14), and Katya's daughter Aurora (4), as well as two of Mum's other daughters, Honey (5) and Leonie (12).

Anyone who sees a sea lion with tracking tags is asked to record the date, time and place, take a photo if possible, and provide the details - via email to augam928@student.otago.ac.nz - to University of Otago zoology PhD student Amelie Auge, who is doing the study.