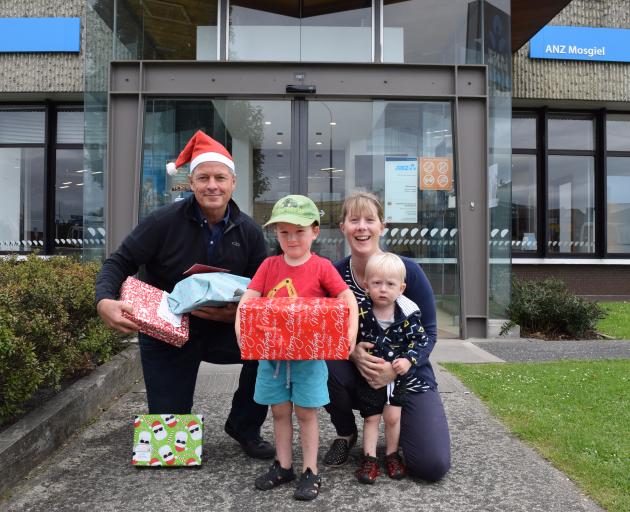 Rotary Club of Taieri member David Glen said for the project, the Mosgiel Community Food Bank gave the club details of children living on the Taieri whose caregivers received parcels from the food bank.

‘‘There are kids out there who aren’t as fortunate as many others and we want to make certain they get a present on Christmas day.’’

The club put the gender and age of each child in a card.

This year, about 200 cards have been put on a Christmas tree in ANZ Mosgiel.

People could take a card and return a wrapped Christmas present to the Mosgiel bank.

The food bank would include the gifts in parcels to be given to Taieri families for Christmas.

When Taieri Times visited the bank recently, Kelly Kleeber and her boys Cooper (3) and Ashton (1) Flett, all of Outram, were putting a present under the tree.

The family had put a present under the Mosgiel Christmas giving tree for the past two years.

A past Christmas tradition had been to pack a shoebox with gifts for a church to send to children abroad but the family decided to support the giving tree project because it was supporting ‘‘something a bit more local’’.

Mr Glen said the project was in its sixth year.

‘‘It’s been very well received - the cards are flying out the door.’’

People could take cards from the tree to The Warehouse Mosgiel to get a 30% discount on the full retail price of a Christmas gift up to $50.

Wrapped gifts needed to be put under the tree in ANZ Mosgiel by 4.30pm on December 12.