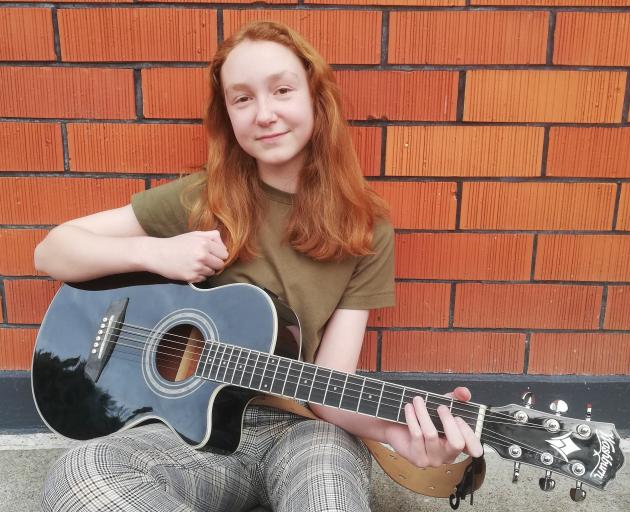 Keira Wallace has had plenty of time to work on new music while in lockdown, and is looking forward to getting back to her recording project. PHOTO: DEBBIE LAWSON
Being in lockdown for the past seven weeks has given young musician Keira Wallace the golden opportunity to work on some new songs.

“For a start it was hard to keep up the creative flow, but over the lockdown period, I have worked on lots of song ideas,” the 13-year-old said.

Music is a big part of life for the Taieri College year 9 pupil, who recently received a $500 youth ambassador award by the Saddle Hill Community Board to support an ongoing recording project.

Keira began learning the guitar at the age of 11, and has loved singing along in the car, with mum Debbie Lawson, from a young age.

“Once I started guitar lessons, I fell in love with making music, and then started to develop my songwriting,” Keira said.

She and other young musician schoolmates formed a band, called Exclamation Mark, while at Fairfield School, winning the best original song title in the national bandquest competition.

The band has continued playing together at Taieri College, and Keira hopes they will get a chance to compete at Rockquest later in the year.

For the past few months, Keira has been working on a three-song EP with Dunedin-based musician and singer Molly Devine.

The three original songs, entitled Sunflower, Lying on the Grass, and Celestial Lovers, featuring Keira on guitar and vocals, with Devine on keyboards, and a band-mate on electric guitar, should hopefully be released later this year.

Working on the song recordings at Molly Devine’s home studio has been a valuable learning experience for Keira, in terms of recording, mixing, and music production.

“Now that lockdown is over, we will hopefully be able to work on recording backing vocals and then the songs will be mastered,” Keira said.

“And once school starts up again, I will hopefully be able to team up with a media studies pupil to make a music video.”

The songs will eventually be available on platforms such as Spotify and YouTube.

Recording and releasing music could be a costly process, so she was excited to learn of the Youth Ambassador funding from the Saddle Hill Community Board.

“I was very excited when I heard they would be supporting me with this funding,” she said.

With her positive and meaningful songs, Keira hopes to spread positivity to others through busking and also wants to encourage other aspiring artists to follow their passion.

Keira has also recently secured a spot in Otago Access Radio’s Unique Otepoti Your Cultural Identity competition and will be interviewed and recorded performing her song Sunflower .