Marine science was the lure for one of the thousands of potential students descending on Dunedin to investigate options for next year.

Visiting from Nelson, the potential marine scientist was one of an estimated 6000 people to visit the University of Otago in the past two days.

The university and Otago Polytechnic held their annual open days on Sunday and yesterday.

University of Otago events manager Jasmine Millar said attendee numbers were slightly down on last year because the event was pushed back from its usual May timeslot due to Covid-19.

"We look forward to seeing some of those faces back as Otago students in 2023," she said. 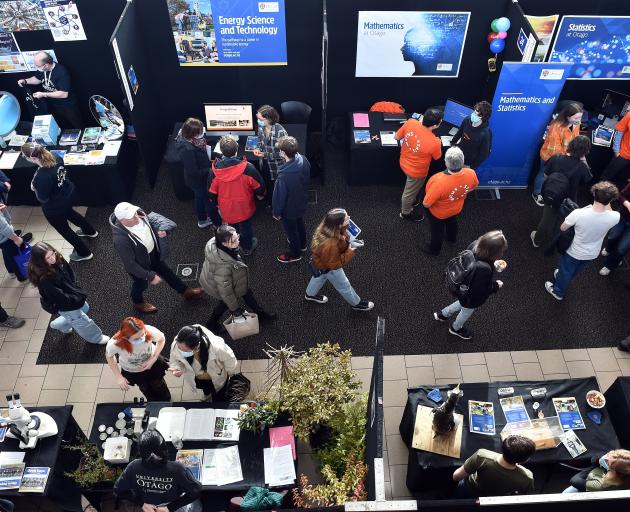 Prospective students look at the options during yesterday’s expo at the University of Otago. PHOTO: PETER MCINTOSH

McKay Watson (17) would be among those studying first year health sciences, with the aim of going into medicine.

Because he was from Wanaka and wanted to be near his family, he favoured Dunedin over Auckland, the site of the country’s other medical school.

Attending lectures to learn more about the course he would soon be taking had been useful, he said.

Also from Wanaka, Bailey Sharp (17) was interested in studying law and experiencing the city’s student culture.

"The social vibe in Dunedin is definitely a factor," he said.

Otago Polytechnic chief executive Dr Megan Gibbons said "many hundreds" of potential students were given a window into the options offered by the polytechnic.

"It has been wonderful to welcome so many learners and whanau to our campus and witness them experience what we have to offer," Dr Gibbons said.