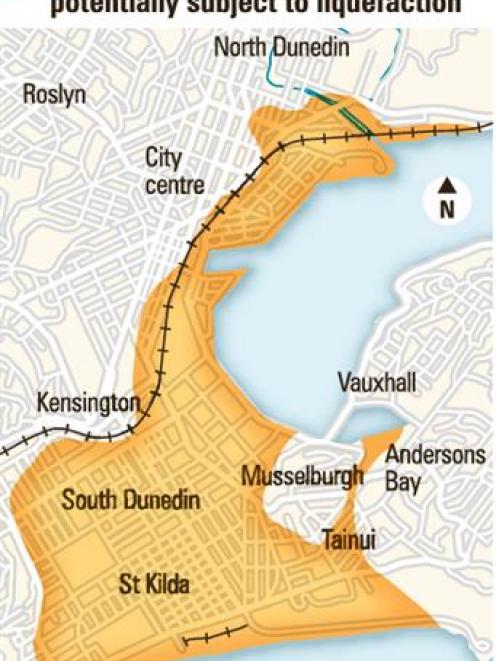 Liquefaction area. ODT graphic.
A significant tract of Dunedin's flat land has been declared at risk of liquefaction, with the potential to jeopardise insurance cover in the area.

The issue could affect home owners from Andersons Bay to North Dunedin, but Dunedin City Council officials yesterday promised to look into the matter immediately, after it was brought to their attention by the Otago Daily Times.

The problem was raised by St Clair woman Leanne Clark, who was considering buying a Forbury Rd home, and requested a land information memorandum (LIM) from the council.

The LIM included a short statement under the "hazards" section, subtitled "site hazards".

It read: "This property is within an area that may be subject to increased seismic movement.

"The land at this address may be at risk of liquefaction in a severe earthquake.

"A site-specific foundation design may be required for this site."

Without a change, every home on reclaimed land in the city could find the wording on their LIMs.

Liquefaction was a serious problem during the recent devastating Christchurch earthquake, and occurs when areas of silty, low-lying land are shaken, causing firm land to turn to sludge.

Ms Clark said as soon as her partner saw the report, he took it to his insurance company, and was told the house would not be insured.

"That company, and another one, said they would not insure them [homes with the LIM wording] in future," she said.

"I pulled the plug on the house."

Despite her problems, the council yesterday said nothing had changed in the area, apart from the wording on the report, and the Insurance Council of New Zealand said it should not necessarily cause problems with insurance.

Council's city environment general manager, Tony Avery, said the warning of seismic movement had always been on the LIMs, based on a 1993 map of soil types potentially susceptible to liquefaction.

The map was not particularly detailed, but included the reclaimed area of the city.

"It's long been known about."

The second two sentences, with the warning of liquefaction, had been changed in late September by council hazards adviser MWH, but following the matter being raised, Mr Avery said it would be reviewed.

The only thing that had changed, and what was behind the new wording, was the Christchurch earthquake, which had made the problem of liquefaction common knowledge, he said.

He had not heard of other councils changing their LIMs following the Christchurch earthquake, and it should result in little more than slightly higher premiums.

"I could name 20 areas with liquefaction concerns; none have problems with insurance."