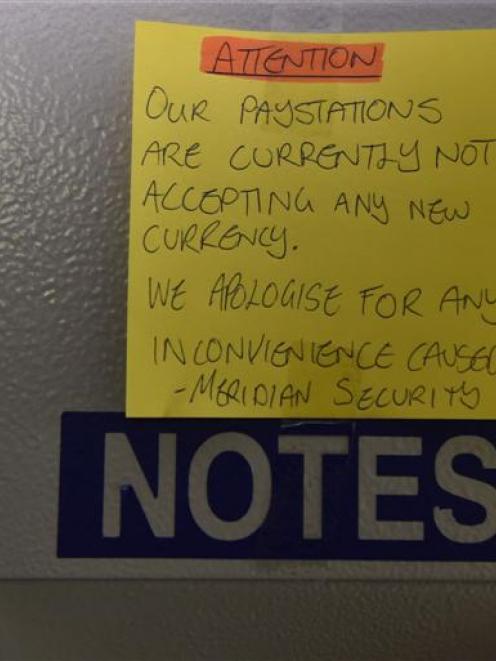 Ticketing machines around the city have been unable to marry the imagery on the new notes, released last month, with what they are programmed to accept.

Software updates would provide the solution, and would be in place for some of the city's machines as early as today, Dunedin City Council fleet and parking operations team leader Reece Smith said.

The council's seven affected machines were in its three parking buildings, but they were still accepting credit cards, eftpos cards and other forms of cash.

The machines would not accept the new notes because they were set up to be extremely sensitive to fake banknotes. Any changes to the notes registered as a forgery, Mr Smith said.

The problem was not new - every time New Zealand's banknotes were changed in any way the machines had to be reprogrammed.

The necessary software solution had been emailed yesterday to the council by the machines' Austrian suppliers, Mr Smith said.

Council staff would use that software to reprogram the affected machines today.

Mr Smith said all the affected council-owned machines had intercom buttons and motorists were urged to use them if they had any problems.

''Generally, we'd be more lenient because it's our problem, not their problem, and [the new notes] are legal tender.''

Meridian mall centre manager Michael Porter said staff had been working for weeks to ensure the new notes did not create any problems, but their German parking ticket machine supplier was still a week away from providing the necessary upgrades.

In the meantime, motorists could use the machines' credit card and eftpos facilities, other forms of cash, or contact the on-site ''car park porter'' for assistance.

All the company's ticketing machines, including those in its 19 Dunedin CBD car parks, were ''in the process of being upgraded to accept the new banknotes''.

That process was expected to be completed by mid-November.