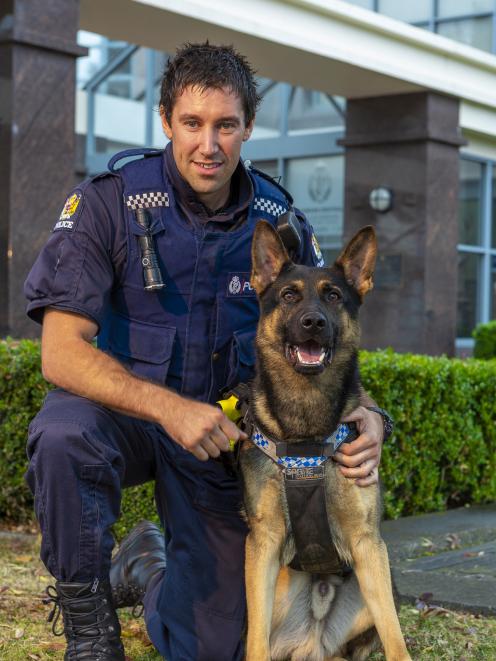 Constable Marcus Saunders and patrol dog Vann outside the Dunedin Central Police Station. Photo: Supplied
A Dunedin constable and his plucky young German shepherd have taken out the top prize for a rookie dog team, following 41 successful tracking missions in less than a year.

Constable Marcus Saunders and patrol dog Vann are this year's winners of the Erridge Cup, given to the top performing rookie dog team.

The pair's exploits have become well known and form part of a stellar year for the resurgent Dunedin dog section, led by Sergeant Mike Calvert.

Between becoming operational on August 23 last year and the beginning of April, the pair made 42 arrests in 41 ''tracking catches'', along with seven pre-warning arrests.

This work has resulted in 80 charges being laid, 98 infringement notices issued, and they have carried out 86 bail checks.

Sgt Calvert, who nominated Const Saunders and Vann for the award, said he was also impressed with his overall attitude to policing, especially on the roads.

''While on patrol, Marcus also has a strong focus on reducing death and injury on our roads.

''He performs at an exceptional level in both his dog handling duties and overall policing.''

''He's the one that deserves all the credit.''

He strongly encouraged others to join the police and become a dog handler, his dream job.

In the past two weeks, Const Saunders and Vann have been deployed to apprehend a knife-wielding man who threatened officers, along with two robbery suspects who fled police in their vehicle.