Top projects on track but others fall behind 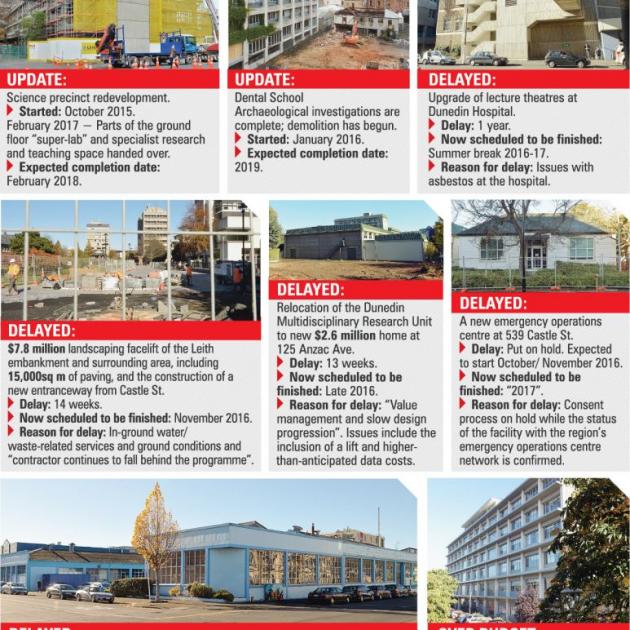 Work on several multimillion-dollar building projects at the University of Otago has ground to a halt or fallen behind schedule.

Higher-than-anticipated costs, asbestos and structural issues are among the problems affecting some university construction projects.

Work on the $7.8million landscaping facelift of the Leith embankment and surrounding area is an estimated three and a-half months behind schedule.

University of Otago chief financial officer Sharon van Turnhout said the project was $1.407million ahead of budget because "the contractor [Downer] continues to fall behind the programme''.

Work on the project, which includes the replacement and relaying of 15,000sq m of paving and the construction of a new entranceway from Castle St, began last July and was originally scheduled to be completed by the end of July.

Parts of the project on Castle Walk, around the St David Lecture Complex, were complete but that project was not expected to be finished until November.

Ms van Turnhout said the Dunedin City Council had completed "in-ground services work'' and ongoing expenditure was the university's portion of the work.

University of Otago Property Services director Barry MacKay said while the delay was "frustrating'' for people on campus, it was important to get the project right.

"The university is working with the design team and the contractor to ensure that the completed project is something that we can be proud of for many years.''

Issues with existing in-ground water/waste-related services and ground conditions had caused the delay, he said.

He did not believe the loss of 33 people who were made redundant from Downer in April had affected the project.

"We understand from the contractor that the required current level of resource required for the project is being maintained.''

Other major university redevelopment projects two months or more behind schedule include a car park on the former Wickliffe Press site (because of structural issues), the upgrade of lecture theatres at Dunedin Hospital (asbestos) and the relocation of the Dunedin Multidisciplinary Health and Development Research Unit (slow design progression).

Work on the Science Precinct and the School of Dentistry upgrade was on schedule, and both buildings would be complete by 2019.

University of Otago chief operating officer Steve Willis said he was pleased the largest projects were on schedule.

"We are really pleased with our progress with our two biggest projects on track and not delayed, and the landscaping project experiencing some delay, but all with the goal of ensuring the project is completed to a high standard, which is what the public, our students and staff generally expect of us when we spend this amount of time and money on a project.''