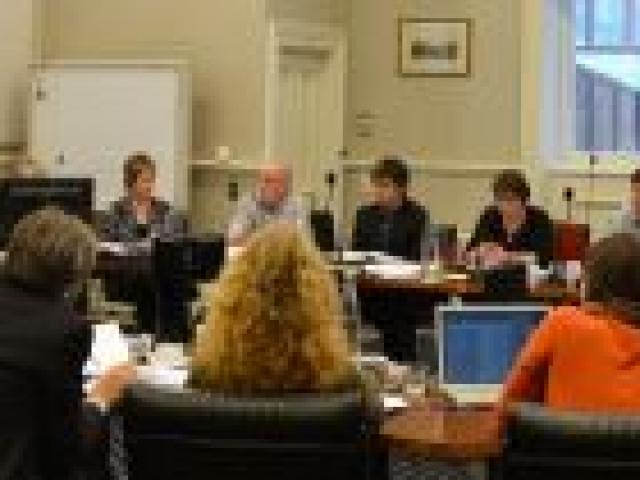 Councillors debate at the Dunedin City Council, Municipal Chambers on Tuesday. Photo by Peter McIntosh.
Dunedin Mayor Dave Cull has set the scene for city councillors as they begin debating what to spend ratepayers' money on, and what not to, in the 2014-15 financial year.

He began the four-day discussions yesterday by outlining that several extra requests for funding had arisen since council staff were asked to produce a draft budget for the year.

Those, together with various requests made for funding last week, threatened the council's intended rates rise cap of 3%.

The council has $647,000 it can spend without going over its self-imposed 3% rates rise cap.

The money has come from a combination of general savings and savings made in the carry forward process, including money saved in the Ocean Beach holding pattern work, footpath resurfacing and pavement rehabilitation this financial year.

However, the amount is only half of all the extra demands for funding that have surfaced since the draft budget, a council list showing requests for a total of $1.21 million.

The figure includes the cost of investing whether to take over governance of public transport, upgrading lighting at the civic centre, installing a new weighbridge at the Green Island landfill, and monitoring the St Clair sea wall.

It also includes more than $630,000 support requested in submissions from community and cultural organisations.

Mr Cull said it was very difficult for councillors to get an immediate clear picture of what exactly all those pressures would mean for the council's 3% target, but staff would provide a running tally of the affect councillors' decisions were having on it, Mr Cull said.

''What we can be pretty sure of is that there will be some hard decisions to make. Clearly there's not enough money to satisfy all of the requests we have had before us last week.''

In order to make the money stretch a bit further, he would offer the remainder of his discretionary fund for this year, along with the chief executive's discretionary fund, and some unused funds from the governance budget, amounting to about $40,000.

The council might use that money to satisfy some of the smaller requests for funding, he said.