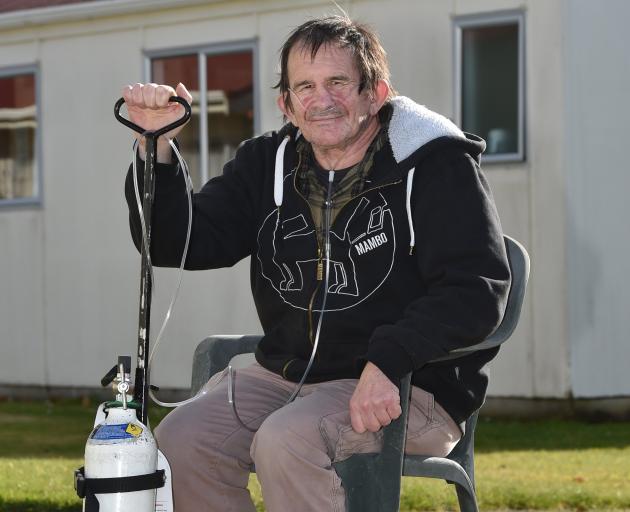 Emphysema patient Glenn Blundell is willing but unable to find the support necessary for a double lung transplant. PHOTO: GREGOR RICHARDSON
The phrase "signing your own death warrant" is loosely used, but Glenn Blundell knows exactly how that feels.

The Mosgiel man recently took himself off the waiting list for a double lung transplant, in full knowledge that he might only live a year or two longer as a result of that decision.

The emphysema patient said he was regarded as an excellent candidate for transplant surgery and had been eagerly awaiting the operation.

However, plans to undergo the procedure, which has the potential to increase the 58-year-old’s life expectancy by several years, have been cruelly scuppered by the requirement that Mr Blundell have several caregivers on hand to assist him pre- and post-surgery.

‘‘It’s a big commitment. They don’t get paid for it, and they have to drop their jobs and give up their lives for however long it takes,’’ he said.

Mr Blundell was adopted and has few relatives he could call upon to help.

‘‘I said to them that I have heaps of support back in Dunedin; it’s just up in Auckland that’s the issue.’’

His doctor had told him the operation could extend his life expectancy by five to 10 years.

‘‘I asked what happens if I don’t get the operation ... he said ‘looking at your notes, two years’.’’

Mr Blundell was diagnosed with emphysema eight years ago and was put on oxygen last year, at which point

a lung transplant was mooted.

‘‘They mentioned about needing support but I didn’t really comprehend what that meant until I went up to Auckland after having had all the tests and scans.

‘‘They said that I had to have a family member or friend to support me ... I had one friend who thought they could do it, but it’s a big ask.’’

‘‘I think the main stumbling block is that someone apparently has to sleep in the room with you.’’

Mr Blundell said he was not angry with the transplant service, but felt he would not be the only person in similar circumstances and that help should be available.

An Auckland District Health Board spokeswoman said the process for acceptance for a transplant was complex.

‘‘As transplant providers, we have both clinical and ethical obligations to ensure patients receiving organs have the best possible outcomes.

‘‘We assess patients ... according to internationally agreed standards, and recipients are provided with extensive education throughout the consideration process.’’

The process included a psychosocial assessment, with social support being a factors taken into consideration.

‘‘Good support is required to enable transplant patients to have the best possible outcomes from what is very major surgery.’’