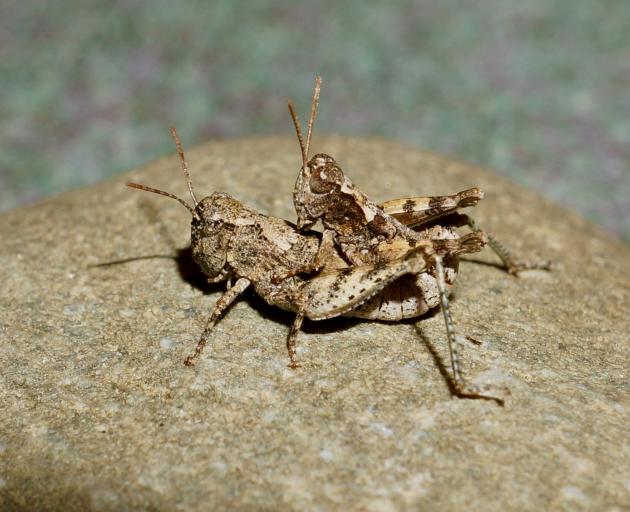 Two Otago lowland grasshoppers mate in the wild. A recent study by Massey University scientists suggests changes in the Otago landscape could be behind hybrid swarms of New Zealand and Otago lowland grasshoppers. Photo: Steve Trewick
Indiscriminate mating among Otago grasshoppers is blurring the lines between species, and researchers suspect the region’s changing landscape could be behind new hybrid swarms of the insects they have found.

Massey University evolutionary biologist Prof Mary Morgan-Richards said it was not entirely clear what had changed since the grasshoppers were observed in Otago about 50 years ago.

But two species that once co-existed were now mating and mixing, forming a hybrid type.

Because the new hybrid grasshoppers were only recently observed, researchers believed rapid environmental change in the climate or the landscape played a role.

"Obviously, there’s been a lot of soil erosion from the rabbits, there’s been an increase of weeds, but also intensification of agriculture, changing with irrigation."

The two grasshopper species were not mating with one another at the time.

But now in places where there were once two species, individual grasshoppers that looked like a mix of the two species lived.

Changing the landscape had a role to play in the spread of the more common lowland grasshopper in the past.

The widespread species now mixing with Otago lowland grasshoppers first expanded its range across New Zealand as trees were felled and pastures opened up as humans arrived, Prof Morgan-Richards said.

Now, as the countryside and the vegetation changed the two grasshopper species were meeting in the wild and they were mating with some success.

It was possible Otago lowland grasshoppers could be bred out of existence, Prof Morgan-Richards said.

As land-use and climate change were increasingly under the spotlight, usually more obvious changes to biodiversity were highlighted.

Changes to a species of grasshopper was not the impact many observers expected.

"And you wouldn’t notice normally unless you looked really hard," she said.