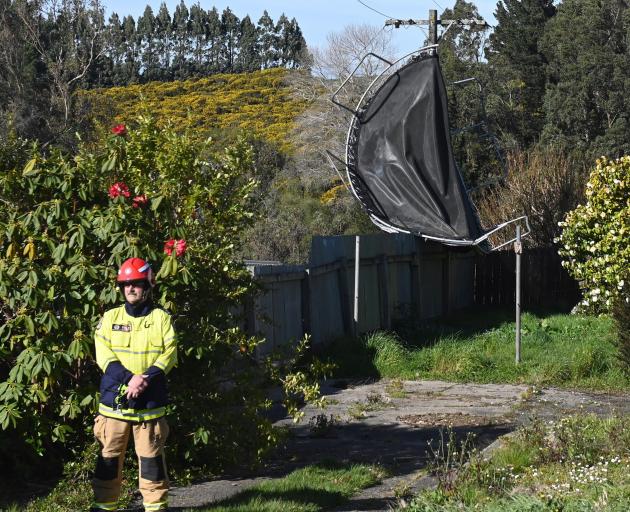 Fire and Emergency New Zealand crews go to a Brockville property after a trampoline crashed into a power pole in high winds on Saturday. PHOTO: LINDA ROBERTSON
Trampolines were sent flying and a downed tree blocked traffic as gale-force gusts reached 100kmh and sowed disorder around Dunedin at the weekend.

Fire and Emergency New Zealand southern communications centre shift manager Kevin Barbara said firefighters were called to a Statham St address on Saturday, shortly before 9am, after the wind picked up a trampoline and wrapped it around a power pole in Brockville.

Firefighters waited for the power company to come and turn off the power before removing the trampoline, Mr Barbara said.

In Corstorphine, at roughly the same time, fire crews responded to a report of a trampoline on top of a car, he said.

Firefighters picked the trampoline up and returned it to where it came from, three houses down the hill.

Earlier on Saturday morning, a tree was downed and blocked both lanes of Portobello Rd, at Vauxhall, about 3am, he said.

The high winds continued to cause trouble around the region later in the day including whipping up a couple of small fires.

A fire under pine trees was reported in Oamaru about 10.50am as winds gusted to 80kmh at the airport there.

And a patch of scrub and tree stumps near Purakaunui caught fire a couple hours later, about 12.50pm.

Both fires were extinguished by local crews.

MetService forecaster Aidan Pyselman said after Saturday’s high winds, the weather was expected to be settled today and over the coming days.

Temperatures were expected to reach daytime highs in the mid-teens later this week.

- Not all the weekend’s drama was caused by wild weather.

Mr Barbara said about 10am on Saturday fire crews were called after a car rolled down a bank and into Lake Wakatipu at Frankton, after a driver failed to put the handbrake on.