Getting dirty on Bath St? Well, it's high time for a shower.

John Swan & Co owner Janette Armstrong is sick of the up-to 30-odd people who urinate, vomit, smash bottles and commit vandalism in the Bath St car park at the back of her Moray Pl shop each weekend.

So sick of it, in fact, that she is planning to install a sprinkler system to give the unwanted visitors a wake-up call. 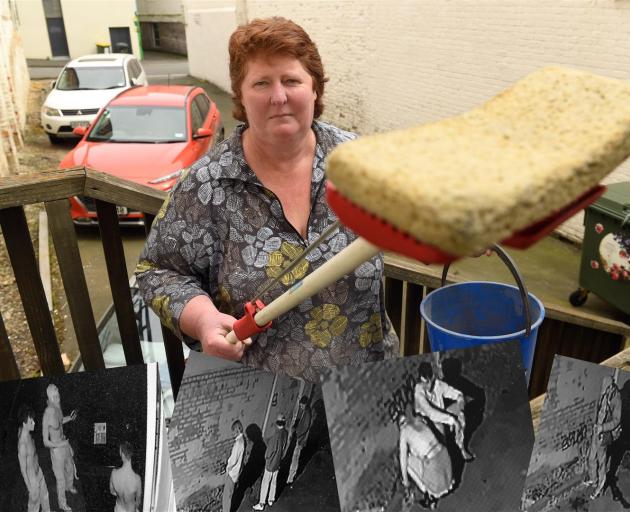 Sick of cleaning up urine and vomit from her Bath St car park is John Swan & Co owner Janette Armstrong. Photo: Stephen Jaquiery
''They're coming down from the Octagon with their booze, and they're rocking in there to have a wee get-together and a wee pee, there's a bit of graffiti, there's all sorts going on out there.''

She will be installing a sensor-activated sprinkler system in the car park, operating between 11pm and 4am, that will spray water whenever it is activated.

The car park is one of the entrances to the business, so every Monday morning staff have to pick up broken glass and clean up after ''disgraceful behaviour'', she said.

The weekend antics were caught on security cameras, and some footage had been provided to police.

Mrs Armstrong had also spoken to the Dunedin City Council about having its street cleaners help with the cleanup, but was told they would not because it was private property.

''I really believe the council should help us.''

Council waste and environmental solutions group manager Chris Henderson said it was an offence to deposit litter on private land without the occupiers' consent.

''The council or police can investigate rubbish dumping and littering, but this requires 'positive proof' of the identity of the offending party, so it can be difficult to enforce in instances like this,'' he said.

''If the owner gets in touch with the council, we can talk about what could be done to help.''

The Octagon will be closed for 'staggered' visitor friendliness in Summer. There'll be a greater range of locational options.