Ms Cameron-Christie, who won $500, is a student in the clinical genetics group in the Otago department of women's and children's health, and is investigating the genetic basis of a liver disease in New Zealand children. Her research is supported by a three-year Cure Kids Kirsty McDermott Memorial Scholarship, amounting to $25,000 a year.

Society secretary and competition co-ordinator Dr Anita Dunbier said the society sought to encourage postgraduate students to develop skills in ''communicating their research to a lay audience'' and wanted to inspire a new generation of scientists to explain their research ''in a way that non-scientists can understand''. 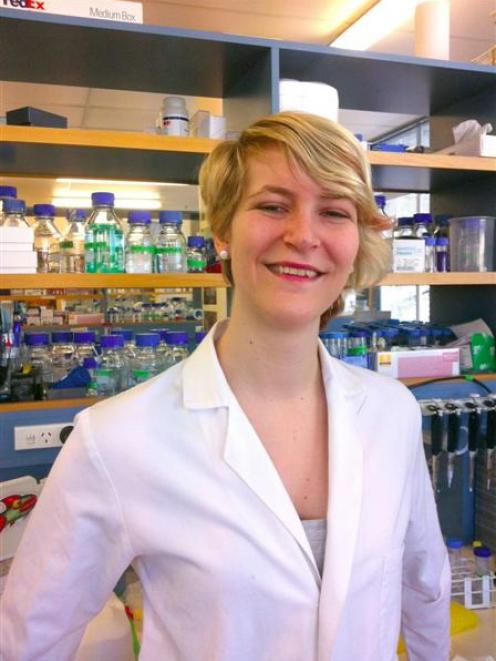 Sophia Cameron-Christie
In their first weeks of life, more than half of new babies have yellow skin and eyes, otherwise known as jaundice. Concerned parents are reassured by a nurse or doctor that the condition is harmless and will soon go away.

But for one in 10,000 New Zealand newborns - an average of about seven cases a year- the jaundice does not pass, and sooner or later the child will be investigated for biliary atresia (BA), the blockage or absence of the network of tubes (the biliary tree) that connects the liver to the small intestine.

These tubes are crucial for the drainage of bile and toxins into the gut. Without them, the compounds build up in the child's liver and begin to destroy it. Sixty years ago the disease was a death sentence; today parents must watch their child go through major surgery in an attempt to re-establish bile flow.

If successful, this surgery can restore their health for a few years, but eventually 80% of patients require a liver transplant, often provided by a parent (because the liver can regenerate, transplants from living donors are now very common).

BA therefore accounts for the majority of all liver transplants in children across the world, at great emotional toll to their families and financial cost to public health services. Remarkably, if reconstructive surgery or a new liver can restore normal bile flow, the disease never recurs.

BA is a great success story for pediatric surgery. For pathology, it remains a mystery. We know that BA can be induced in newborn mice by orally infecting them with a specific virus. But in humans it is likely there are multiple types of BA with multiple different origins, including different infections or toxins.

Today most research follows the idea that the unborn child's biliary tree suffers minor damage during pregnancy from a toxin or virus, which triggers the immune system to destroy the tree completely. But rare mutations may also play a part, as some BA cases seem to begin much earlier and there are very rare reports of siblings getting the disease.

Some ethnic groups also have consistently different rates of the disease; in people of European descent, less than one in 15,000 babies will be found with BA, while in East Asian countries the rate is double that, and the highest rate is in Polynesian populations with as high as one in 3000 births.

However, no gene nor virus has been conclusively linked to BA across different eras and populations. It is possible the disease is entirely preventable, but the only successes in treatment have been the metaphorical ambulance at the bottom of the cliff.

My work is with a unique, familial group of BA cases discovered in a New Zealand iwi and it represents a previously unexplored approach to studying this disease. As many as 14 cases of BA have been identified in the last 20 years in this extended family, for them representing a rate of about one in every 100 babies.

With enormous help from the children's parents and relatives, we have constructed a detailed pedigree of their relationship to each other. Two are as close as second cousins, while several are likely to share a common ancestor as far back as eight generations. Identifying their susceptibility will gives us clues about the origin of BA from a new angle.

It may help us diagnose children earlier, improve treatment for patients worldwide or even reveal the environmental factors that put children at risk, which could be removed to prevent the disease in the future.

Unfortunately, we know that BA genetics in our family are not as simple as classic genetic disorders like cystic fibrosis and Huntington's disease. This makes it difficult to use traditional methods of tracking genetic diseases. Everybody carries millions of differences in their DNA that account for the normal variation between us, or have no effect at all, and scientists can identify these flags and use them to follow genes or traits of interest in different people.

However, the family is much too large to trace genomic flags through the entire family tree. Conversely, the group is too small, too closely related, and Maori genetics too poorly studied, for us to simply study the same genetic flags in our affected children and compare them to healthy people as we would if we were trying to study a complex disorder like heart disease.

Furthermore, many ancestors of our affected children must have the same DNA as the BA patients, but neither they nor their children got the disease. That means no mutations carried by healthy siblings or cousins can be ruled out as suspects. And the puzzle gets even more convoluted: because BA is still common in unrelated Maori it is likely that one or two of our affected children have BA by chance and not because of the same genetic susceptibility.

This means they won't carry the risk factor in their DNA at all and will confound attempts to find a shared factor.

To account for all these unknowns, I have been trying to find new ways to study these children's genetics. One method is to use cutting-edge technology to read huge amounts of DNA, sometimes more than four DVDs worth or raw text for each person, to look for new mutations the affected children carry.

Another way is to sequence millions of known genetic flags in order to outline the shared parts of their genomes as precisely as possible. My work has a long way to go.

But with time and a bit of luck, I hope one day to be able to go back to the family and help them fully understand how and why their children got BA, as well as give them hope that in the future we will think of BA as preventable rather than inevitable.