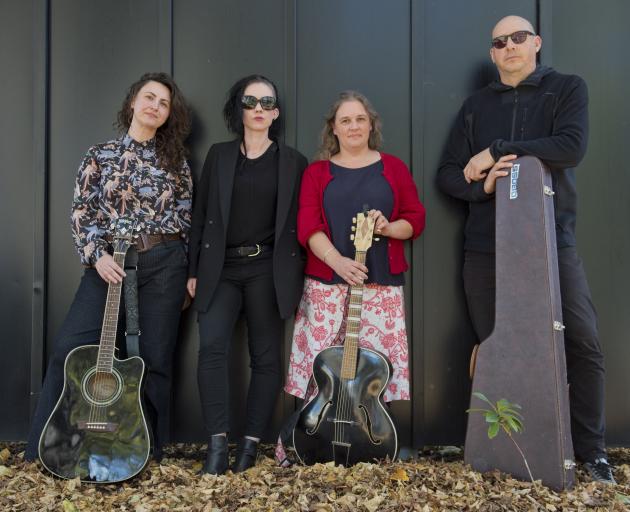 Musicians are meeting to consider further action and a venue owner says the soul of the central city is at stake after the gig was shut down.

Dr Fairleigh Evelyn Gilmour complained to the Dunedin City Council after a concert her band was playing in was shut down by noise control on Friday, April 9.

Her band Marissa and the Dandelions, along with a couple of other bands, was performing at Dog With Two Tails in Moray Pl when staff received an excessive noise order about 9pm.

The sound engineer, her husband, called the council trying to ascertain what a reasonable noise level was.

"The operator said that turning it down and shutting all the doors and windows would be adequate," she said.

They did that, but when her husband requested further information, he was told that could not be provided because turning it down to a reasonable level was subjective.

During the final band’s set, between 10pm and 10.45pm, police officers arrived with a seize order, although they did not carry it out.

The band was shut down minutes before their scheduled finish time, which Dr Gilmour described as a "horribly awkward experience".

The noise control officer claimed he could hear the music from the Meridian Mall car park, something Dr Gilmour found hard to believe.

"At no point could you not have a conversation at a normal volume directly outside the venue.

"I find it hard to fathom how we were annoying anyone."

She has written to the council to complain about the issue, and a group of musicians was getting together this weekend to consider further action.

Dog With Two Tails owner Michael Wilson said the current noise control system was subjective, based on the opinion of a security guard, and unfair, as Octagon bars and Forsyth Barr Stadium were treated differently for enforcement.

"There are no objective measures for the maximum level of sound a show should have, nor is there a noise curfew," he said.

Gigs at the venue ran until 12.30am at the latest, he said. The complaints only started a year ago.

He said the council had been good to deal with and had been trying to find a solution.

"We do need noise control and I don’t want a city full of irresponsible venues causing a nuisance, and we also need a centre that has a soul to it."

A council spokesman said noise control had been called to Dog With Two Tails six times this year. Complaints had come from three different individuals.

The council was looking into Dr Gilmour’s complaint and would be arranging to meet both her and Mr Wilson to discuss the issue.

Any complaint about excessive noise was assessed based on subjective criteria, including any relating to Octagon bars, the spokesman said.

It's not that simple, it depends on which frequency ranges are being used , compression ratios, what building materials they are going through and the building shape is etc .All these and other considerations can alter how sound is perceived despite being at the same db level . example of this is tv advertising which until limiting laws were introduced were often broadcast louder than the shows . Now they use compression etc to give the same effect despite the restrictions. Music producers also use similar tactics to me ale their songs stand out on radio. And then there's considerations like higher frequencies are more absorbed by people and walls than lower frequencies and thus outside a building the db rating can stay similar while different eq settings can vastly effect how it is perceived. Ie Adding a bit more mid and a bit less bass can often alleviate a lot of noise issues while maintaing similar overall volumes. Plus be ass can be felt and much lower volumes that higher frequencies. Then there's things like different speakers have different throw ranges etc and so on. In the end it's subjective because it has to be because not all sounds are equal even if the db is the same

Same old problem we see all over the world.
Some activity is happening at some location. People decide to move locate their home to somewhere adjacent to that "noisy" activity and then the newcomers complain about the activity.
DCC are encouraging people to move into mid city accomodation while failing to ensure adequate measures are in place to limit new residents "rights" to complain.
These are the very same issues Dunedin is facing with gentrification of the harbourside. Unfortunately DCC are myopically looking at getting people out of cars, everything else is being ignored.

I used to live in Moray Place not far from that area in an apartment for 10 years, I knew when I moved there I was close to bars and entertainment venues, I expected to hear live music wafting from venues especially on Friday and Saturday evenings. If someone lives in the central city there will be noise from rubbish collection trucks, traffic, live venues, clubs and the passing exchanges of the socially lubricated public. These are the trade offs of that sort of location. Its a bit rich complaining about noise from established venues when the area is renowned for music and live gigs. Its not the quite of suburban streets or the countryside. If I lived in an apartment in the industrial area of town for example, I would also expect a certain degree of related noise, both during the daytime and evening.

Voll
Try living in City Rise with the whole hillside of 'socially lubricated' drunks. It's driving families out of town at the very time we want them in town so they can walk to work and cut down on emissions.

I and another 60 + aged friend visited this bar on 17 April after attending the Jazz Concert at Hanover Church.We parked in the Octagon opposite Nova and walked to Moray Place.There was a band playing which due to doors/windows being closed we could not hear until we were in Moray Place.The sound did not travel into George St.If you occupy commercial or residential acommodation in the inner city anywhere,other inner city activity must be a compromise.Musicans need venues where they can perform live.Keep up the great work.