Vandervis casts votes, but they count for nothing 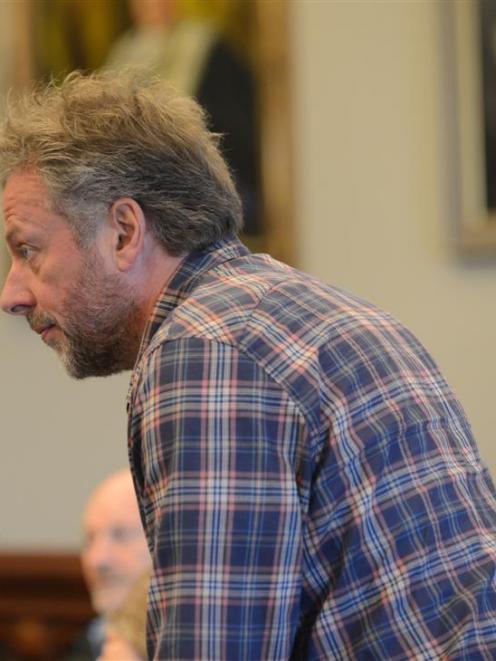 Cr Lee Vandervis makes a point at yesterday's Dunedin City Council economic development committee meeting before casting a vote - despite being prevented from doing so. Photo by Peter McIntosh.
Dunedin city councillor Lee Vandervis is vowing to continue defying his voting ban after attempting to ignore his punishment during stormy exchanges yesterday.

He joined other councillors in casting verbal votes during back-to-back meetings of the council's economic development and finance committees yesterday afternoon.

That was despite being temporarily stripped of voting rights last week, after failing to provide a satisfactory apology for angry outbursts and misleading a council subcommittee.

His move prompted the council's consultant lawyer, Michael Garbett, to advise councillors and council staff to ignore his votes at yesterday's meetings.

Instead, the meeting's minutes should record only that Cr Vandervis was not permitted to vote, Mr Garbett said.

That would be in keeping with last week's council resolution, which left the final judgement on the adequacy of Cr Vandervis' apology to council group chief financial officer Grant McKenzie, he said.

Mr McKenzie told the meeting he had sought legal advice before deciding last Thursday night Cr Vandervis' apology did not comply with the resolution.

Cr Vandervis said he was the victim of another ratepayer-funded legal ''ambush'' because Mr Garbett's advice had not been circulated before yesterday's meetings.

Cr Vandervis said his own legal advice suggested councillors needed to vote on whether his apology was acceptable or not, before his punishment could be enforced.

Cr Vandervis also demanded to know the cost of having Mr Garbett present for yesterday's meetings, and talked over committee chairman and deputy mayor Chris Staynes as he attempted to move the meeting on.

''It is probably I think now the fourth or fifth situation where I have been legally ambushed by a rate-paid lawyer.

''I am an elected representative and that, I don't believe, is appropriate.''

Cr Kate Wilson called for a point of order over the debate's relevance, while Cr David Benson-Pope muttered ''sit down'' and suggested Cr Vandervis circulate his own advice.

Cr Staynes invited Cr Vandervis to question council staff later about the cost, saying it was not for him - or the committee - to justify the decision.

The debate came after councillors voted 11-3 last Wednesday to give Cr Vandervis 24 hours to offer a genuine apology, without conditions, for earlier behaviour.

The council's code of conduct committee had concluded he engaged in bullying and aggressive behaviour, and misled the council's audit and risk subcommittee over the Citifleet fraud.

Councillors also authorised council chief executive Dr Sue Bidrose or her delegate to decide whether any apology received was appropriate.

Cr Vandervis emailed an apology later the same afternoon, expressing remorse for ''loudness'' but refusing to apologise for misleading the subcommittee unless confidential Citifleet fraud documents were released.

Cr Vandervis, contacted late yesterday, maintained the decision was illegal, but would not reveal the source of his legal advice or release copies.

He vowed to continue ignoring his punishment rather than be denied ''my responsibility to vote on behalf of the thousands of Dunedin people that voted for me''.

Council staff later confirmed the cost of Mr Garbett's presence at yesterday's meetings was about $400.