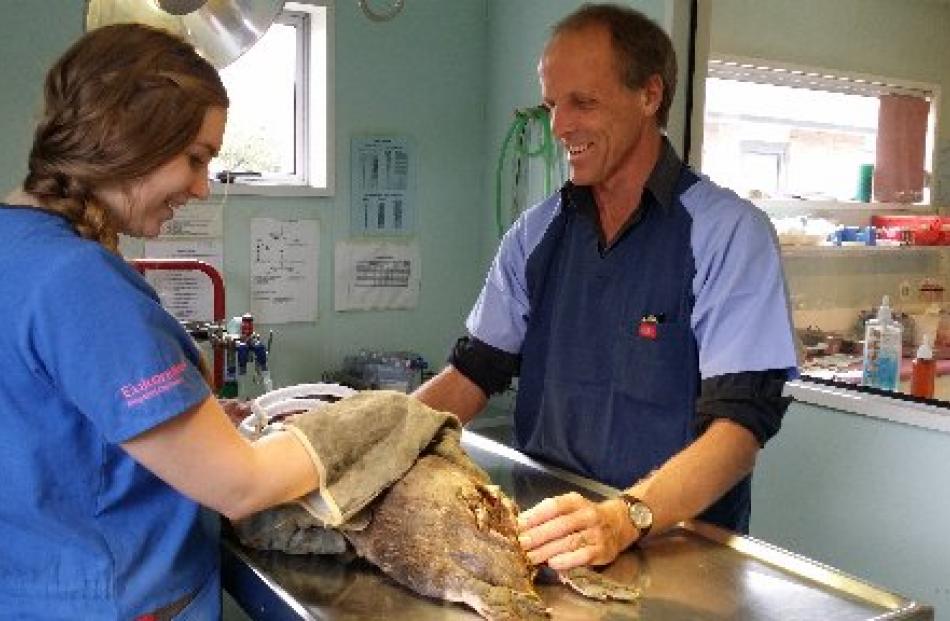 St Kilda Veterinary Centre vet Tony Malthus and vet nurse Rebecca Clere operate on a yellow-eyed penguin that was brought in to the centre after being attacked by a barracouta last week. Photo: Dan Hutchinson

Hundreds of yellow-eyed penguins are still shuffling around today thanks to the efforts of Dunedin veterinarian Tony Malthus, who has been stitching them up for 15 years.

The first few months of 2015 has been the busiest season for penguin injuries that he can remember with more than 30 brought in so far suffering from barracouta bites.

Mr Malthus said the first few months of the year were always a bad time for barracouta attacks on penguins but usually he treated about five to 10 birds a year.

The Department of Conservation only has to pay for the drugs used in the treatment of the penguins with Mr Malthus happy to provide his services free of charge.

''We quite enjoy doing it because you are doing something useful and if we didn't do it, the animals would perish eventually.

''They are not going to get better on their own, they are endangered and every one is very valuable.''

Most birds need to be anaesthetised, treated with antibiotics and stitched up before being sent to Penguin Place at the end of the Otago Peninsula for rehabilitation.

He said the worst cases were penguins that had been injured in the past and not treated. They often developed an infection that became osteomyelitis - a serious bone infection.

''They are had-it basically because their joints are damaged by infection and those ones, we euthanise them.''

Yellow-eyed penguins are not the only animals Mr Malthus treats on a pro-bono basis for the Department of Conservation.

Last year he fixed a broken jaw on a sea lion pup. He has also treated seagulls and shags, a pukeko with a broken leg and quite a few kereru with injuries from flying into cars or house windows.

Animals that were too seriously injured to be treated at Mr Malthus' St Kilda Vet Centre were flown to Massey University.